Why we need a climate plan - Part 1

Protecting our environment has been a key priority for our government since taking office in 2015. We know that concrete actions are required immediately in order to protect and preserve our oceans and freshwater, animals and their habitats, against the threat of on-going climate change. As we move ahead, we have developed Canada’s climate plan, and encouraged provinces, territories, First Nations, and municipalities to do the same.

The average annual temperature in Ontario is expected to continue to rise, and some of the greatest increases are in Northern Ontario. This means the ice road season grows shorter and shorter, leaving some of our remote and rural communities with restricted access not only to their homes, but also to goods and services. These milder winters also result in an increase of tick- and mosquito borne diseases as the warmer weather allows them to spread and breed further north every year. These disturbing findings were released recently as part of the 2018 Greenhouse Gas Progress Report by the Environmental Commissioner of Ontario.

While a shortened ice road season and an increase in tick- and mosquito-borne diseases are just two examples of how our warming climate affects the residents of Northern Ontario, we see other examples on a daily basis, both here at home and across the world. And while the province of Ontario decided to dismantle a climate change plan that was working and replace it with a weaker approach, the federal Government of Canada remains firm on their efforts to fight climate change.

Despite strong scientific evidence, on July 3, 2018, Premier Ford ended Ontario’s provincial climate plan, including its cap-and-trade pollution pricing system. The province also cancelled their investments in energy efficiency and projects that help schools, businesses, and hospitals reduce costs, therefore costing Ontarians money and good jobs. In the Financial Accountability Office of Ontario’s report: Cap and Trade: A Financial Review of the Decision to Cancel the Cap and Trade Program, it states the Premier’s decision to cancel the program will cost the province $3 billion.

It’s clear that putting a price on pollution will lower Greenhouse Gas Emissions, clean our air, and make industry more competitive. The federal government will ensure a fair price on pollution for Ontario residents and businesses. In addition, all revenues will stay in the province – and 90% will go directly to families through a Climate Action Incentive, while the other 10% will go to schools, hospitals, Indigenous peoples, universities, communities, and small and medium-sized businesses to invest in ways to improve their energy efficiency.

In addition, every Ontario household will receive a Climate Action Incentive in 2019 when they file their taxes. For example, a family of four in Ontario will received a rebate of $307 on their annual tax return. Families residing in rural Ontario will receive an additional 10%, for a total rebate of $338 for a family of four. That’s more than the increase they will see in energy costs. To further support Canadians living in rural Canada we have made exemptions to carbon-pollution pricing, including off-grid communities who use diesel for electricity, as well as some flights to northern and remote areas.

While there are some who continue to deny that climate change is real, in scientific circles throughout the world, the evidence is clear – and we need to act now so that we don’t leave a world that our children and their children need to clean up. It is our responsibility and putting a tax on pollution will help to slow down the emissions and Canada’s Climate Action plan does just that by putting money directly back into the pockets of Ontarians, while placing the onus on polluters to clean up their act and come up with better ways to control their emissions.

Next week’s column will explore other aspects of Canada’s climate plan and how they affect the North. 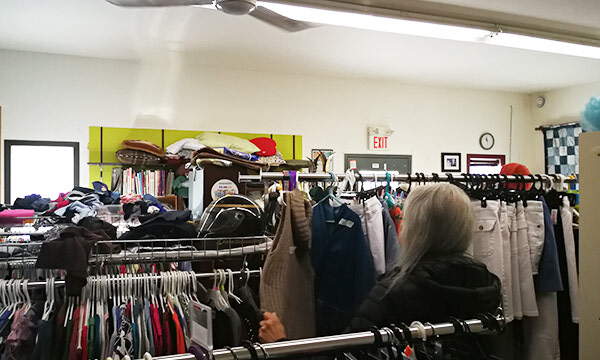 Sioux Lookouts Salvation Army Thrift Store is looking to the community to continue its generous and supporting ways.