For the past several months Sioux Lookout residents have been noticing some changes to their recycling routines, leading to some confusion on what will and will not be accepted by the collection crew on recycling day. To that end, the Municipality of Sioux Lookout has issued a media release to assist residents who are unsure of what the existing requirements for recycling collection are.

In the release, dated December 13, The Municipality states “The Municipality of Sioux Lookout has been receiving an increase in the number of comments and complaints about recycling pickup in recent weeks. The rules for what items can be put in your Blue Box, the containers B&M Delivery will accept recyclable items in, and how cardboard is bundled for pickup have not changed but are being more strictly enforced.” The release continues, “One major issue lately has been glass in the recycle bins. Glass is not collected for recycling in Sioux Lookout. If glass is found in your Blue Box, crews will not sort it out – the entire Blue Box will be left behind.”

As the release goes on to explain, “Recycle logo stickers to mark your bins and totes as recycling containers are available to all residents, free of charge, from the Public Works Department, 41 Fifth Avenue, from 8:00 a.m. until noon and 1:00 p.m. to 4:00 p.m. weekdays, excluding statutory holidays. Any bins left out without the white recycle logo (including the free recycling stickers) will not be collected by B&M Delivery.” Of note is that B&M Delivery will not be responsible for damages to any containers not designed for Blue Box use, as other plastic totes may not be designed for the impacts of cold weather use.

As for only having recycling in a Blue Box, Balla says it’s about doing the collection as quickly and safely as possible, stating, “It boils down to efficiency and safety. Especially on the Sioux Lookout highway and a few other spots where there’s a lot of traffic. These teams are out there sometimes in a precarious position. If you’ve got a recycling truck going down a side road and we are driving by a place with a brown bin, because it’s not a (Blue Box) recycling bin, and then we see there’s recycling in it as we go by…. we can’t just hammer on the brakes. When we see these blue bins, we know that it’s recycling, and now you can start slowing down to pick it up. If we have to stop at every household to see if its recycling because it’s in (different colored boxes), time is money. You want to get this done as quickly as possible as efficiently as possible. Blue is designated for recycling.”

As part of the release, the Municipality provided this reminder of materials that can be left out for Blue Box collection:

Any items not listed above should not be placed in Blue Boxes and could result in your Blue Box not being collected that week. Also of note, empty oil containers will not be accepted, even if stamped with recycling numbers 1 through 7, rinsed or not.

The Municipality encourages residents with recycling pick-up issues to reach out to B&M Delivery at (807) 223-3298. 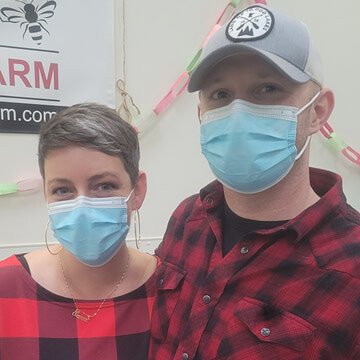