Approximately 80 participants ran, jogged, and walked, all while getting coated in colour, during a five kilometre colour run sponsored by Sioux Lookout Pride on June 16.
Participants, joined by Sioux Lookout OPP officers and Northwestern Health Unit staff, started and finished at the Sioux Lookout Travel Information Centre. The route took participants two-and-a-half kilometres down the Umfreville Trail and just past the Ministry of Natural Resources and Forestry Fire Management Headquarters, where they reached a turnaround point.
Following the colour run, participants gathered at the Travel Information Centre for a Pride Family Picnic where they enjoyed lawn games and water activities.
Organizers and colour run partakers agreed that the event was fun and successful.
“It was a fun race… They threw water and colour on us,” said Kurt Duewel, colour run participant.
“It was good. I would want to do it again, and come first again,” said Christopher McCord, another colour run participant.
“I think that this went really well today, and that it was a big success,” said Jason Duewel, Sioux Lookout Community GSA (Gay-Straight Alliance) member.
“I think it went better than expected. When we do an outdoor event it’s always weather dependant, but it was a beautiful day. There were so many people who came out. It was a great turnout, and it was our first attempt at a colour run,” said Mary-Ann Flatt, Sioux Lookout Community GSA founder.
Those involved with the event were amazed by the support shown, and agreed that it’s great to see the community step up in support and solidarity.
“It feels great to see a bunch of people that support GSA and that will be here for other people,” said Jason Duewel.
“Seeing all these people out is really amazing. To have this much support behind our Gay-Straight Alliance and to have this many people spend their Saturday morning going for a five kilometre run is great to see,” said Sioux Lookout OPP Constable Andrea DeGagne.
“It makes me feel so proud, happy and supported but, mostly, knowing that our youth are truly safe. This is a community that’s one big family, and it’s wonderful,” said Flatt.
DeGagne, who helped organize the event, shared that a lot of coordinating and inspiration for the colour run came from local youth.
“It’s fantastic. We got a lot of youth involvement to help coordinate, and we had a lot of youth come out and help get the event going. It’s fantastic to see them stepping up and taking pride in their event that they want to see happen. Seeing their success was amazing,” she said.
To stay up to date on local pride events and Sioux Lookout Community GSA events, check out their Facebook page @siouxGSA. 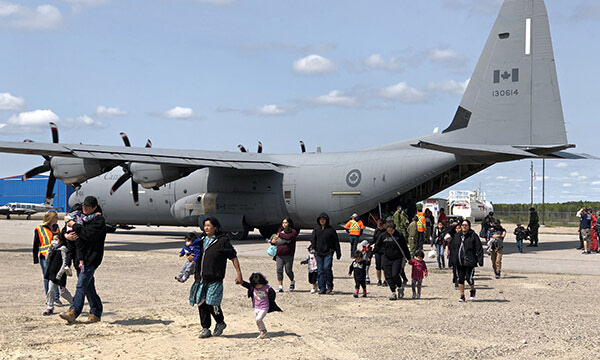 Wildfire near Pikangikum under control, another near Pickle Lake being held

The State of Emergency in Sioux Lookout has been rescinded as evacuees from Pikangikum First Nation have now returned to their community.