Brohm, who earned a spot as one of the starting goalies on the team, moved to Thunder Bay for the hockey season, which saw her go to school there for most of her grade eight year.

“When I was in grade five, I told my parents that I wanted to play for the Queens, but they wouldn’t let me because I was too young and I couldn’t move out by myself. They said they would look at the option when I was in grade ten, and that ended up happening two years early because there wasn’t much more options for me in this area,” Brohm explained.

“It was really nerve-wracking because I would be living away from parents, all of my family, and going to a new school. Everybody already has their cliques and everybody already has their friend groups, and then coming into the school and being completely new was very scary. It was really exciting at the same time because I got to meet new people and get new opportunities for school,” she added.

She not only had new experiences through her school but, through playing for the Queens, she was able to do a lot of traveling to play in an abundance of tournaments throughout the year. The high-level hockey coupled with more intense coaching saw Brohm have a year full of learning and improvement.

“It was a really good experience. There was lots of learning opportunities because I’ve never actually had a goalie coach… We had a goalie coach on the ice with us and our coach was a goalie too when he used to play hockey, so he was also another goalie coach on the ice. It was nice to have because, with any questions that I had, I could go to one of those two to ask about my skill development… My coach, he actually knew what to do for drills to benefit the goalies and the players and not just the players. On previous teams I’ve played for we really just did drills for players and not goalies, so I’d just be in the net getting shot at and not actually getting improvement,” she said.

After having a successful year with the Bantam A team, Brohm is looking to pursue a spot on the higher-level Thunder Bay Queens Bantam AA team. She’ll be heading back to Thunder Bay shortly for the tryouts.

Brohm believes that, after this year’s experiences, transitioning back to Thunder Bay should be easier, but entering grade nine will present challenges of its own.

“I think the transition from living in Sioux Lookout to Thunder Bay will be a lot easier because then all my friends know in Sioux Lookout that I’ll be back and everything will be okay after that. Going to Thunder Bay, I’ll be going to a new high school with 1200 kids, so there’s a lot of students and a lot of grade nines. It will be like meeting new people over again, so I won’t necessarily be with my friends who I went to school with this year in Thunder Bay. It will be all new again,” she said.

“Two months into the second semester next year she’ll be looking to come home (following her hockey season), and it’ll take a bunch of coordination to make sure we don’t end up blowing half a year of high school. Online courses would help give her some flexibility,” shared her dad James Brohm.

When asked about her best experiences throughout the year and season, Brohm shared that she really cherished the bond between her and the other goalie on the team. Having a fellow female goalie on the team was a bit of a first for her.

“The other goalie on my team this year was one of my best friends in Thunder Bay, so we had a really good bond. It was just an amazing experience because my experiences before with other goalies weren’t that good because I’ve always played on boys teams, and I’ve never actually had another girl as my goalie partner. Having another girl as a goalie partner was really amazing because we actually could connect in different ways than just hockey… My team was like a second family to me when I wasn’t with my family,” she explained.

“It was a great year. She had so much support down there from her friends, teammates, coaches,” said James Brohm.

Throughout the year, Brohm had the opportunity to share her experiences with others by contributing and blogging on womenshockeylife.com. Fellow players and hockey parents could read about her experiences through the website to get her perspective on what it takes to move away from home and pursue higher-level hockey.

“I saw that they were asking for writer’s submissions, and I thought this was a unique experience that she could share with other people, players, and parents who may be looking at sending their kid away. It shared the experience and gave her take on what it takes to move away and play hockey, all the new stuff, the bus trips, and managing friends in two different towns. That’s what most of the blogging was about. It was monthly with a different topic every month,” said James Brohm.

Moving forward, Presley’s pursuit of hockey could see her head down south where she could showcase her skills during the Ontario Women’s Hockey Association (OWHA) under-16 high performance tryouts.

“We were hoping that she’d go down for the high performance under-16 tryouts for OWHA this year…She’s in her first year of eligibility for the U16 program, so if they only have spots for 30 goalies, for example, but they have 60 goalies, they’re going to take the kids who they can’t look at next year first. There’s still a lot of time for a program like that,” James Brohm concluded. 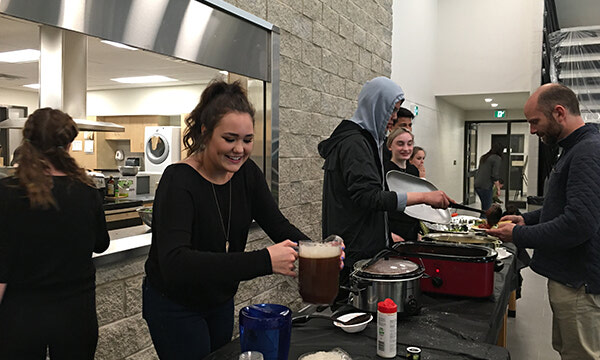