Norah Love was born Norah Theresa Lane on October 20, 1899 in Plymouth, England. Norah chose to continue her education and pursued training as a kindergarten teacher as she had an affinity for young children.

In 1918, Benson Boys Love - age 25 was a Canadian stationed in Plymouth.  The Lane household had a telephone exchange and was used by the Canadians as a communication centre. Ben was often sent to the Lane home with messages to transmit and romance between Norah & Ben began to blossom. They were married on February 24, 1919.

Ben was sent to Russia for a short time, prior to the takeover by the Communists. The czar was overthrown, the royal family murdered, and the Canadian troops were forced to retreat.

Once Ben returned to Canada, Norah travelled as a war bride to join Ben.  It is difficult to imagine a young woman of 19 travelling across the ocean by ship, leaving her family behind to begin a new life so far away. This was well before trans-Atlantic telephone calls, never mind email and cell phones. The only means of communication across the Atlantic was letter writing, which Norah depended on to stay connected with her family abroad. The letters did not travel by air but by ship, they were the original “snail mail.”

The young couple soon moved to Thunder Bay as Ben was a government timber inspector and the likelihood of finding employment was much better there. Norah forgot about her dream of being a kindergarten teacher for the time being and while they were there they had four children - Benson, Tommy, Mary Katherine (who died at two days old) and Patricia.

In the summer of 1926 the young family moved to Sioux Lookout. Between 1929-1937 four more children were born - Noel, Dennis, Moira and Bobby. Ben became employed by the Department of Lands and Forests, whose base was located at West Point Cove at the time. The family set up house on the base and a small community evolved there. The area housed the home, garages, work sheds, a barn for the cows, a pig pen, a coal shed, several docks and a bunk house. The family raised pigs, cows, chickens and geese and had a huge potato patch (of course with a young woman from Ireland) and grew all the vegetables that a young family could devour. During the Depression years Norah could not turn away any of the hobos that congregated at Hobo Rock when they offered to work for a bit of food. There was always plenty of work to be done and payment of a hot meal was appreciated by many destitute men who travelled the rails to seek a bit of work.

Between 1931-1935 Ben was loaned from the Department of Lands and Forests to the Town of Sioux Lookout to run the bush camp at Mile 5.  This camp supplied wood to the CNR for their roundhouse. In 1935 Ben went back to the Department of Lands and Forests - which became known as the Ministry of Natural Resources. The Base was moved to Highway 72 and a few years later Ben was able to purchase the property now known as “Love’s Cove”. To this day family members still occupy that property.

Over the years the children enjoyed all that the area had to offer – swimming, hiking, skating, boating, fishing and the dances at the Town Pavilion. As the family grew, one by one the children married and moved on to make homes of their own.

Life was good for the family despite the inevitable tragedies. An infant daughter had passed away as well as one grown son, Tom. In 1957, shortly after Tom’s death, Norah’s beloved Ben passed away suddenly. With all of her children grown and spread across the country, Norah was now on her own for the first time in her life.

In the fall of 1959, Norah finally was able to return to her homeland and to enjoy a long overdue reunion with her family.

To help ease her grief Norah returned to teaching and started her own kindergarten in her own living room. This was a first for Sioux Lookout and there are plenty of “baby boomers” who would remember their introduction to schooling by Mrs. Love. She truly loved children and had a huge influence on many young lives. It became apparent that Mrs. Love’s kindergarten was here to stay and she finally graduated to a classroom in the basement of Sacred Heart School. The kindergarten system was now firmly established in Sioux Lookout. She continued to teach for a number of years and earned her retirement, but never forgot her students as she kept a picture of each of them from over the years.

Norah spent her retirement travelling to visit with all of her children and grandchildren across Canada and into the United States. She continued her letter writing campaign that had been firmly established in the early years in Canada. On her travels she made many friends and every time she returned home she had at least one new friend to write to.

After her death, on October 22, 1981, Norah’s commitment to children was commemorated by having the first day care in Sioux Lookout named in her honour.  The “Norah Love Day Care” remains as an example of how one person’s dedication can influence the lives of so many. 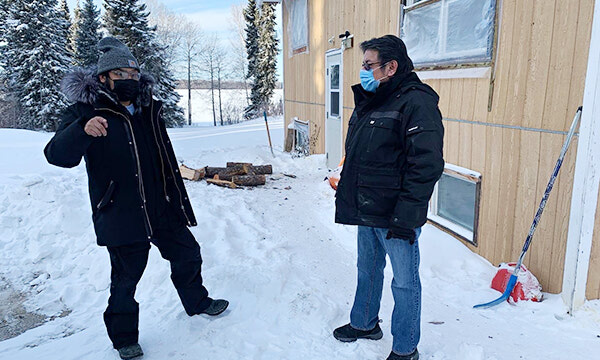 After calling for military assistance on Jan. 3, four members of the Canadian Armed Forces Rangers arrived in Bearskin Lake First Nation on Jan. 9...