A 51-year-old Pickle Lake resident is facing multiple charges after officers from the Ontario Provincial Police (OPP) Sioux Lookout Community Street Crime Unit (CSCU) and the Organized Crime Enforcement Bureau (OCEB) joined forces with Nishnawbe-Aski Police Service (NAPS) to execute a Controlled Drug and Substances Act (CDSA) warrant in Pickle Lake on October 20.
“As a result of the investigation, police located and seized a quantity of suspected illicit substances including Cocaine and Psilocybin (magic mushrooms) with an estimated street value of $12,500, and over $3,600 in Canadian currency,” an OPP news release informed.
Dave Seaton of Pickle Lake has been charged with the following offences:
Possession of a Schedule I Substance for the purpose of Trafficking, contrary to Section 5(2) of the CDSA, Possession of a Schedule III Substance for the purpose of Trafficking, contrary to Section 5(2) of the CDSA, and Possession of Property Obtained by Crime under $5,000 contrary to Section 354(1)(a) of the Criminal Code.
The accused was released from custody and will appear in the Mishkeegogamang First Nation Ontario Court of Justice on December 4 to answer to these charges, none of which have been proven in court.
Police are asking anyone with information about the trafficking of illicit drugs to contact the OPP at 1-888-310-1122. People can also share information anonymously by calling Crime Stoppers at
1-800-222-8477 (TIPS), where they may be eligible to receive a cash reward of up to $2000. People can also report online at: http://www.p3tips.com/273. 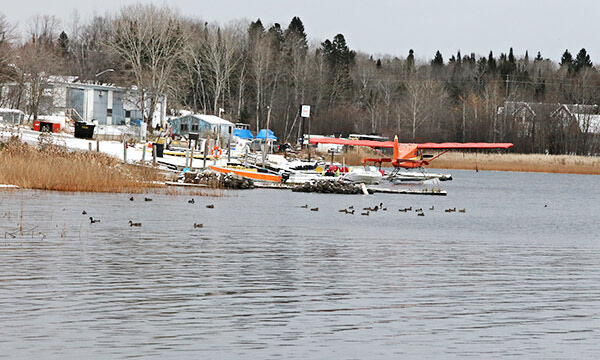 This group of ducks was spotted swimming on Pelican Lake on Oct. 25.