With International Women’s Day arriving on March 8, it only seems fitting to take some time and celebrate the amazing women who have shaped our lives.

That’s the premise behind a local International Women’s Day Photo Contest, running through the month of February. The contest encourages individuals to submit a photo of a woman who has made a special impact on their life, including a short write up describing what makes them an admirable and inspiring figure in the photographer’s life.

Treena Ashmugeesha is the Indigenous Prenatal and Postnatal Support Worker at the Sunset Women’s Aboriginal Circle (SWAC). As she explains, the idea for the contest grew out of a combination of creative thinking and necessity, stating, “Last year we did a Virtual Art Contest for International Women’s Day. People did different kinds of art. There were drawings, poems, things like that. This year we talked about it and were trying to figure out what to do. Normally we would do a little get together with tea and stuff but with COVID and restrictions and things, I thought why not do a photo contest? We can encourage people to take powerful pictures of women that they look up to in their lives, that they love so much and admire so much. Share these photos with us and write a little blurb about what it is about them that’s inspiring, or what it is that they love about them. Just a way to empower the women in our community and a way to put faces to names.”

While there has been some interest from communities a bit farther afield, Ashmugeesha explained, “It’s open to anyone Sioux Lookout wide. I did actually have some people messaging from Dryden and surrounding areas asking if they could participate too, but we are trying to keep it local for the Sioux Lookout, Hudson, Lac Seul kind of area, because we do have prizes and things that we want to give out, so it just makes it easier to keep it local that way.”

Ashmugeesha added, “We are looking forward to seeing all of the submissions. We think it’s a great opportunity to really empower the women in our community and share how important they are and how much we love them.”

The contest runs until February 28, with winning entries and prizes to be announced on March 8 in conjunction with International Women’s Day.  Contest registration forms are available on Facebook at https://bit.ly/3BepmS7 or by emailing [email protected] All completed entries must be sent to [email protected] by the end of day Feb 28.

Ashmugeesha concluded, “We are looking forward to seeing all of the submissions. We think it’s a great opportunity to really empower the women in our community and share how important they are and how much we love them.” 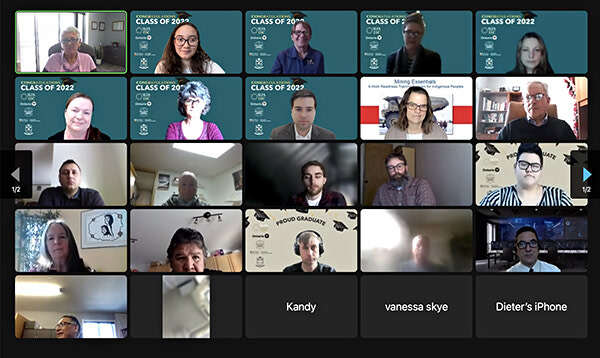 The Sioux Lookout Friendship Accord Mining Centre of Excellence (SLFA-MCE) held a virtual graduation ceremony on February 2 for 25 students...