Pelican Falls First Nations High School (PFFNHS) staff and students, along with visitors from surrounding areas, celebrated Indigenous culture during the school’s 19th annual powwow on April 13.
The celebrations began on April 10 during a sunrise ceremony at the school, which also featured the lighting of a sacred fire. The fire was kept burning for four days.
Students then celebrated a culture day at the school on April 12, which was an opportunity for them to explore and learn more about traditional Indigenous cultures and practices.
“I had reached out to the Nishnawbe-Gamik Friendship Centre, who’s a big supporter of our powwow…From that I had drummers come out, I had our arena director Joe Wesley come talk to the kids about powwows…We had a woman come out from Lac Seul to share about powwow dancing, we have elders here doing spiritual teachings with kids, I had beading with some of our native studies teachers, and then we also had traditional games,” explained PFFNHS teacher, and powwow coordinator, Lynnette Martin-Paulichenko.
Students shared that they enjoyed the different learning opportunities during the culture day.
“It was fun. I enjoyed making bannock,” said April Tait, a grade 10 student.
“We got to learn about the medicines, the powwow, our traditions, and teachings from elders. There was so much information…I really love it. I love exploring my culture because it makes me feel like I find who I am as well,” shared Cree Sutherland, a grade 11 student.
“It’s great seeing the students exploring and wanting to learn more,” said Dani Desmoulin, who is an educational assistant at PFFNHS.
“I think it’s super important that they are at least given the opportunity to learn about all their traditional culture…It’s really good, I think, to expose them to it,” said Martin-Paulichenko.
The powwow took place throughout the afternoon on April 13, which saw the school filled with students, staff and visitors enjoying traditional foods, drumming and dancing in traditional regalia.
That evening, all those in attendance enjoyed a feast that featured turkey, ham, mashed potatoes, stuffing, gravy, and veggies along with traditional foods like a variety of fish, moose meat, bannock, and wild rice.
Participants agreed that the powwow was a great opportunity to gather and connect with everyone in attendance.
“It feels so great. It makes me so happy. The fact that the staff are out here, the students who are on site are out here, and we have people from Lac Seul and surrounding area here as well. You get a feeling of a lot of community that’s built from an event like this. Everybody is gathering and hanging out together,” Martin-Paulichenko explained.
“It feels really great. I feel like I’m connecting more with my people and everyone around me. It’s been great meeting new friends, connecting with the elders and hearing their stories,” said Sutherland.
Even the youngest and smallest attendees were enjoying each opportunity, which was a delight for others to see.
”That’s my favourite part. Just seeing all the little kids run out there and be a part of it is awesome,” said Desmoulin.
“They’re our future generation and I feel like it’s really good for them to learn while they’re younger,” Sutherland concluded. 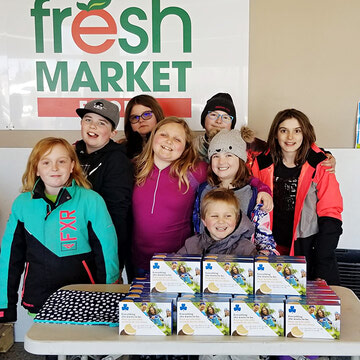