Pelican Falls First Nations High School celebrated the athletic and academic accomplishments of its students over the past school year at an awards banquet on April 26.
Guest speaker Dallas Soonias, the first Indigenous man in Canada to play for Canada’s men’s national volleyball team, spoke with students about overcoming obstacles (in his case injuries) to achieve their goals.
“Expect struggle. Struggle is going to come and if you expect it, and you know it’s coming, then you can be prepared when it hits. So whether you’re like me and your body gets destroyed over the course of your professional career, or you go to university and it’s not exactly what you thought it was going to be, accept that you can get around that to reach your goal,” he told students.
Joanna Quequish, who received three academic awards during the evening, was especially proud of her cooking award.
Quequish said she has cooked all her life, adding it is a passion of hers, a passion she plans to follow.
“As soon as I graduate high school I plan to go to college to study culinary management and hopefully open my own restaurant,” she said. “It’s fun. I get to be creative in different ways,” she added.
Checotah Powless, who was named Senior Male Athlete of the Year shared, “I just really tried to get a lot of work in at the gym and do my best every day.”
“I just love playing sports,” he added. “I just tried to push the guys, keep them going.”
Basketball has been his favourite sport at PFFNHS and he was named MVP of the senior boys basketball team.
“I’m graduating. I’m going to Niagara College and I’m hoping to play basketball for them,” he said.
Philip Howe, who won five academic awards, and one athletic award, said he is driven to be the best he can be.
He had this advice for his fellow students, “I know leaving home is hard, but you have to do it, work hard, do it for your education.”
Also during the evening, the JR. Boys Volleyball team was recognized for earning NorWOSSA silver, while three athletes (Philip Howe, Alyssa McKinney, and Angelia Kwandibens) were recognized for winning NWOSSA wrestling bronze, and two (Maximus Meekis and Anawdon Keeash) were recognized for attaining NWOSSA wrestling silver. 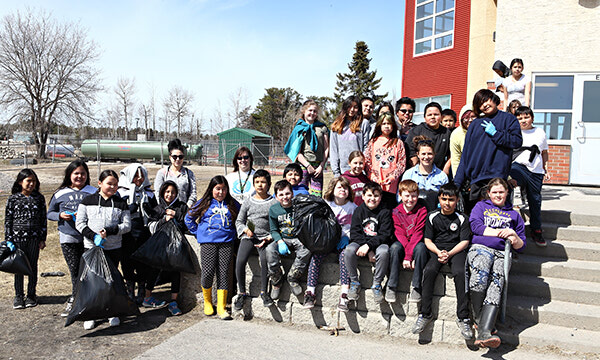