With small painted rocks, Sioux Lookout residents are bringing a smile to the faces of their friends, family and neighbours.
Organized through the Facebook group Sioux Lookout Rocks!, area residents are collecting and painting rocks and distributing them, “in public locations that can be easily found by children and parents or anyone who want to get in on the fun.”
Sioux Lookout Rocks! Further described, “Rocks can be painted or decorated in just about any manner, BUT the rocks should have the town’s name painted on the back so people searching from other cities know where they came from. When you find a rock, post a picture to this page with the location you found it. Then place it somewhere new for someone else to find… or keep it. But please participate and make a new rock to show off!! “It’s FREE for everyone to participate!"
The Facebook group cautioned, “Please don't hide rocks in areas that need to be mowed. If you hide them underneath the water, make sure they aren't sharp rocks. Please remember proper hand hygiene after picking up or re-hiding rocks, by washing your hands or using sanitizer.”
Former resident Hayley Rice explained, “I first heard of the idea for showing off rocks from a small city in Southwestern Ontario. I adapted the concept to use for Sioux Lookout and voila Sioux Lookout 'Rocks! was created.”
Rice commented, “I started off with inviting friends and friends-of-friends to join, mainly from a creative standpoint, and to capture the interest of those with children and also the artistic members in
the community.
“The group was created in 2017 with a small member attendance, but of course with Covid-19 preventing us from participating in many group activities the member count has increased by quite a bit. Since the beginning of the pandemic, the group has grown by 34 per cent and member posting has increased by over 500 per cent; with pictures and posts being uploaded several times a day!”
Rice said people can take part individually or in small groups and allows people to show off their creativity and artistic talents.
She added, “It's a fantastic way for us to enjoy others creativity and we can be outside and get to know Sioux Lookout!”
Dorothy Broderick and her children Ruth and Charles are just some of the people who have been painting and hiding rocks around town.
“We painted rocks and hid them at Mills Creek as a way of getting out and making a nice walk a bit more of an adventure,” she shared.
Ruth Broderick said, “It was fun to do.” Charles Broderick added, “Mine was hard to find.”
Nancy McCord and her family have also been painting and hiding rocks throughout
the community.
Nancy McCord said although she paints the majority of the rocks in her household, hiding the rocks has become a family affair.
“The kids have been having a lot of fun. They’ve been hiding them almost every day,” she said.
Locations around town the McCords have hidden rocks include on Sioux Mountain, on islands the children have paddled out to, as well as at the beach.
“Almost every time someone goes for a walk or a bike ride, they bring a couple,” she added.
“It is quite fun to do and its nice knowing that people like us doing it. I know there’s a lot of people already hiding rocks. I like how people just enjoy it and are happy when they find a rock,”  Ethan McCord, 11, said.
Brother Donovan McCord, 8, commented, “We’re raising our community’s spirits and just helping Sioux Lookout feel safer.”
The family has also taken to hiding rocks in Ignace where the children’s grandfather lives.
Rice concluded, “I hope membership continues to grow and people who are involved continue to show their kindness and appreciation through rocks!” 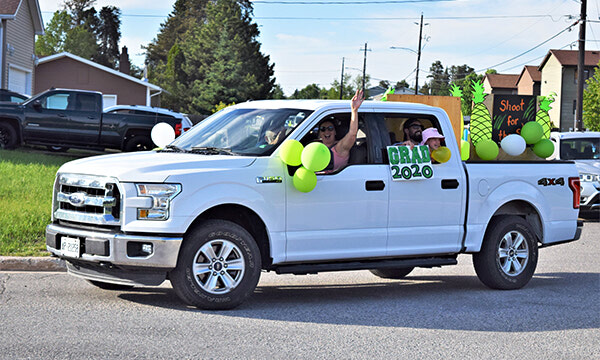