The fun-filled outdoor concert, attended by approximately 80 people, safely brought people together for an afternoon of music, adhering to physical distancing and other public health guidelines.

The host of the event, Vera Kameda-Lacroix, who is also Kori Kameda’s grandmother said, “On Canada Day, they went down to the dock and decided that they would sing O’ Canada to everyone on the lake. They sang for about two hours and the neighbors were all enjoying it. So, we tossed around the idea of having an outdoor concert here.”

People were able to enjoy the concert from the shore as well as in their boats.

“People respected the masking and they needed to register so we had a list of who’s there. The guides and parking lot attendants all wore masks,” said Vera Kameda-Lacroix.

She added that the event was a success and she whole-heartedly enjoyed it. “We were most pleased about the voice and the sound that could be heard really loud everywhere, right up to all the boats,” she said. People in groups of three or four were seated as one bubble, maintaining the recommended safe distance from the next.”

Andee Leclerc-Kameda has devoted several years of her life to the music industry. The solo bilingual singer-songwriter, originally from Quebec City, has made several television appearances along with releasing her full-length pop album under the label Universal Music Canada, to later tour with the likes of Demi Lovato, Bryan Adams, Marianas Trench and many more. The artist later moved to Toronto to pursue her music career, where she met Kori, also a professional musician, and quickly bonded over their passion for music. Kori Kameda released his first album in 2010, and had been performing with his former band in the GTA before he joined Andee’s band as a guitarist.

“A lot of things didn’t go as we planned this year, especially in music and the entertainment industry, and so we had more time and we were reflecting on what do we really want to do? We decided to leave Toronto and focus on recording an album. We are recording from Grandma’s house. We’ve set up a small studio in the basement,” said Andee. The duo is looking forward to the release of their first album together, inspired by alternative rock, pop, blues, and folk music. 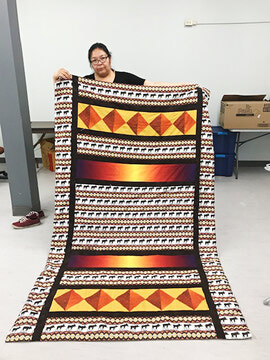 The Sioux Lookout Area Aboriginal Management Board (SLAAMB) has introduced a four-week sewing course. Accommodating three individuals, the course is focused on giving students the skills of art and craft relating to interior designing.