The Ontario Association of Optometrists (OAO) and the provincial government aren’t seeing eye to eye on compensation for optometrists seeing patients covered by OHIP. Optometrists across the province have suspended seeing patients for any OHIP covered primary eye care services effective September 1, 2021. At the center of the dispute is the remuneration the government provides for varying services provided by Optometrists across the province. The OAO website states that, “In 1989, the Ontario government paid $39.15 for an OHIP eye exam. In 2021, 32 years later, they pay an average of $44.65. This amount does not come close to covering the cost (including rent, staff, utilities, equipment, taxes and supplies) to provide an eye exam.”

In a letter sent to MPPs on September 17, the OAO states, “While Ontario physicians receive the second highest compensation in all of Canada, Ontario optometrists receive the lowest compensation rates for services in all of Canada.” The OAO adds that it would need a 65 per cent increase in funding to meet the levels of the next-lowest funded province, Manitoba. The OAO adds, “Our equipment, staffing, and item costs are not lower than those in Manitoba.” The province was reimbursing 55 percent of OHIP covered exams prior to the suspension of services. The government also offered, “An immediate compensation increase of 8.48 per cent at the fee code level, retroactive to April 1, 2021. This represents a “catch up” of fee increases calculated to reflect similar increases applied to physicians over the past decade.”

The OAO website maintains that this 8.48 per cent increase would in fact move the average reimbursement for an eye care exam from it’s current $44.65 to $48.43. This leaves the average Ontario optometrist paying more than $30 out of pocket when they examine an OHIP insured patient.

Christine Elliott, Deputy Premier of Ontario, and Minister of Health, wrote in a statement released on August 23, just over one week before the OAO’s deadline, “We are very concerned by the OAO’s response to our offer and their approach to this process, particularly their continued suggestion that they intend to withdraw services that many vulnerable Ontarians, including seniors, rely on,” adding “The Ministry of Health is committed to continue to have meaningful and productive discussions with the OAO and to build a roadmap to an ongoing and successful working relationship with Ontario’s optometrists.”

To date, the two sides appear to remain deadlocked. Sol Mamakwa, MPP for Kiiwetinoong, expressed his concerns in a letter to Minister Elliot issued on September 29, stating, in part, “People in the north are now without eye care where we already have fewer practitioners and the costs to provide these essential health care services are higher. Our area also has a higher incidence of diabetes in people of all walks of life, particularly First Nations people. This demographic, along with seniors and children, are who our optometrists in the region are most concerned about.” The statement ended with Mamakwa stating, “Each day that this is not resolved adds unnecessary risks to the health of people across Ontario.”

Dr. Suzanne Lockyer is an Optometrist whose business, Lockyer Optometry, operates out of Sioux Lookout every Thursday. As Dr. Lockyer explains, “The situation is very frustrating for our patients.  Our practice sees many children, seniors and patients with diabetes from across the region who have all been affected by the OHIP withdrawal job action. In Sioux Lookout, I see many patients that have been referred to our office by physicians from Sioux Lookout First Nations Health Authority and the Hugh Allen Clinic, as well as from the (Sioux Lookout) Meno Ya Win (Health Centre’s) Emergency Department physicians because access to ophthalmology in Thunder Bay is extremely limited. Wait times are usually well over one year. So, it was not a decision that was taken lightly.” Dr Lockyer continued, “Ontario’s optometrists have been ignored by successive Ontario governments for over 30 years, including 1217 days (and counting) of inaction by the current Ford government. Dr. Brian Lockyer and I have had productive conversations with MPP Sol Mamakwa, who has supported us by sending a letter to Health Minister Christine Elliott.  There is nothing I would rather do more than see patients as usual; however, at the current stagnant funding model, it is not sustainable. The Ontario government expects us to see more patients per day to offset our rising overhead and specialized instrument expenses, which we will not do, as the quality of care will suffer.”

Dr. Lockyear finished by adding, “By far, Ontario has the lowest funded optometrists in all of Canada.  This fight is ultimately for our patients.  Our voice alone is not loud enough, so we encourage everyone to contact their local MPP and sign the petition at  www.SaveEyeCare.ca.” 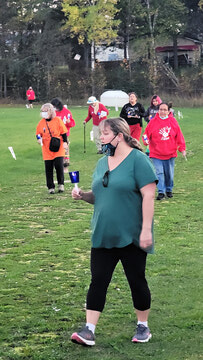 On Monday, October 4, community members gathered at the former Queen Elizabeth District High School track for the Sisters in Spirit Vigil to honour the memory of missing and murdered Indigenous women, girls, and gender-diverse people...