Ojibway Power Toboggan Association off to roaring start to the season

Let it snow might not be the first thing that some people think as we head into this winter season, but for Dean Osmond it would be just what his club is hoping for. According to Osmond, President of the Ojibway Power Toboggan Association (OTPA), it takes more than just a good snowfall to get area trails in top form, stating, “Winter prep begins long before the first snowflakes are in the air, and it all starts with having the OPTA Board of Directors in place.”

Osmond continued, “The last couple of years with COVID we haven’t been able to have general meetings, but we just had our first general meeting last week. Our board and executive positions are all filled, but we do have some positions for committees that are vacant and hopefully as we start getting people showing up to our general meetings, we’ be able to fill them and get some volunteers that would like to do that.”

Despite OPTA being a winter sport organization, the prep work behind the scenes is pretty much a year long commitment, as Osmond explains. “OPTA are operating basically 10 months of the year, so basically July and August are the only two months that we get where we do not have a board meeting. People think the snowmobile club is operating for three months, but that’s not correct, it’s basically a 12-month commitment. We’ve been working diligently trying to clear the trails because of all the blow downs we had this year.”

The club is also busy with a couple of larger scale projects as well, as Osmond describes, stating “Resolute (Forest Products) is looking at cutting in our trail between Ignace and Sioux Lookout, so we’ve been working to get our bridge (on that trail) moved. We have to get that engineered, and we are working with Keewatin Aski right now to do that. The bridge itself has to be re-engineered and the abutments engineered as well. I’m not sure if it’s already been moved, but they will be moving it at some point in time, and we’ve got to be prepared for that. Hopefully it’ll get done in the new year for sure. That’s on the ‘A’ trail from Sioux Lookout to Ignace.”

Osmond clarified, “The bridge we are working on moving is the Amik River Bridge. Resolute will be logging in there and will be putting in their own bridge to accommodate their equipment. We frequently encounter competing interests for the same road access, but for the most part these companies work with the club to ensure trail access. As an example, when they require the road access that the trail is on, Resolute has winged the side of the road so that we can groom and run alongside the road. In the case of moving the bridge, Resolute and the MNR have been very helpful and working together to get everything arranged for the removal and reinstall of our current bridge.”

The bridge move isn’t the only large-scale project the club is tackling this year, as Osmond went on to explain. “The warm-up shelter at the top of Minnitaki is fairly old, So the club has built a new warm-up shelter and that’ll be moved up there as soon as the ice is formed and we are able to tow it up there, we’ll have a brand-new warm-up shelter on that trail as well.”

Despite having some snow on the ground, the club trails remain closed. As Osmond explains, “None of our trails are open yet. Unfortunately, for the most part, if our lakes aren’t frozen over it’s not very far you are going on a snowmachine in our region. All our trails are interconnected by the lakes.”

Osmond is hopeful for a successful season of club activities ahead, continuing, “This year, hopefully, COVID willing. We didn’t get to do our Poker Derby, this year. We usually have a wind-up at the end of the season, and we weren’t able to do that due to COVID restrictions. Normally during the season we’ll have some suppers out at the clubhouse where people can come and have supper and just kind of mingle. We haven’t been able to do that so I’m hoping that this year we’ll be able to reinstate some of that stuff, of course keeping in mind that we’re going to have some sort of COVID precautions. We’re hoping to be able to do some of that this year.”

Trail permit sales wrapped up on Dec. 1, with Osmond commenting that sales have increased this year to 171 from last year’s 160. For those looking to find information on the status of trails in the region, Osmond said “We have a Facebook page that is operated through the OPTA, and then there is the OFSC website as well that you can use to tell when the trails are open.”

For those hoping for a new snowmachine to ride this year, Osmond added “Right now we have our 2022 Polaris (RMK 600) raffle that’s going to be drawn on Dec 28. Tickets can be purchased at the following locations: 5 Mile Corner, Drayton Cash and Carry, Bumper to Bumper, Mascotto’s Marine, and through the club itself, which can be contacted through their Facebook page.”

Osmond offered his thanks to all the volunteers and members who help make sure the club has a successful season each year, stating, “I personally would like to thank all the volunteers, the board of directors, the executive, and all the committee members that make this possible. There’s a lot of work that goes on in the background… all the grooming hours that are done, all the maintenance on the equipment, all the trail cleanup. This all takes numerous hours and lots of volunteer work in order for everybody to get on their sleds and ride the trails… I just want to make sure that everybody is aware that this is a user pay system. The permits fund all of that work that goes into that, the groomer, all the equipment that’s required, to keep those trails clear and keep them groomed.”

Osmond added, “We didn’t have a lot of snow last year, and it’s important that the lakes get frozen and get a good ice base before we do get a lot of that snow because (otherwise) we end up with lots of slush. We are hoping that we get a good base on the lakes, then more snow, and hopefully we get more than we did last year.” 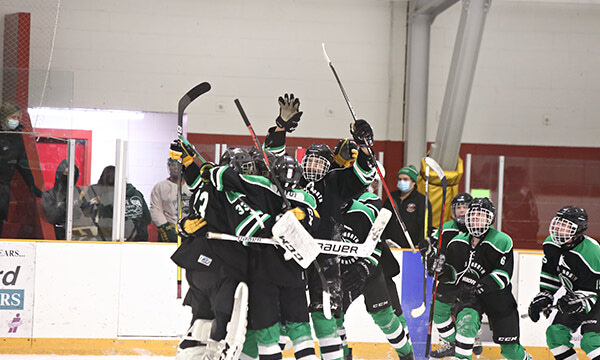