She went on to state, “There is an increased general risk across that area and within the Municipality. We are aware of at least one Variant of Concern (B.1.1.7 - UK variant) in the Sioux Lookout Health Hub. At this time a lot of it is spread from household to household that we are seeing, or that we can identify. There are still cases however, where we cannot identify what the cause or the likely acquisition is. So at this point, it is very much important, particularly in the Sioux Lookout Health Hub, that people are following the stay-at-home orders and the public health recommendations.”

The number of active COVID-19 cases in the Sioux Lookout Health Hub had dropped down to 21 as of April 19.

On April 16, the provincial government announced strengthened enforcement of its stay-at-home order, in addition to imposing new travel restrictions and strengthened public health measures to combat, “the rapid growth in COVID-19 case rates and relieving mounting pressures on the province’s health care system.”

Both the provincial declaration of emergency and the stay-at-home order (O.Reg 265/21) have been extended for an additional two weeks.

CBC News reported that, “In a statement Saturday, Solicitor General Sylvia Jones said officers will no longer have the right to stop any pedestrian or vehicle to ask why they are out or request their home address.” Other news agencies in Ontario also reported the same.

In an April 18 news release, Ontario Provincial Police informed that, “Consistent with the new emergency orders, OPP officers will not arbitrarily stop an individual or a vehicle, or enter a dwelling for the singular purpose of checking compliance with the order. Individuals are not expected to provide proof of essential work. Officers who believe an individual may be participating in a gathering that is prohibited may require the individual to provide information to determine whether or not they are in compliance.”

Officers can disperse and ticket individuals found to be non-compliant resulting in a $750 fine.

• Prohibit all outdoor social gatherings and organized public events, except for with members of the same household or one other person from outside that household who lives alone or a caregiver for any member of the household;

• Close all non-essential workplaces in the construction sector;

• Reduce capacity limits to 25 per cent in all retail settings where in-store shopping is permitted. This includes supermarkets, grocery stores, convenience stores, indoor farmers’ markets, other stores that primarily sell food and pharmacies; and,

On April 17, Premier Doug Ford shared on Twitter, “Ontario’s enhanced restrictions were always intended to stop large gatherings where spread can happen. Our regulations will be amended to allow playgrounds but gatherings outside will still be enforced. Play outside safely. Parents keep your distance & wear masks if you can’t.”

The provincial government also announced on April 16 that, “In addition, effective Monday, April 19, 2021 at 12:01 a.m., the government is limiting the capacity of weddings, funerals, and religious services, rites or ceremonies to 10 people indoors or outdoors. Social gatherings associated with these services such as receptions are prohibited, except for with members of the same household or one other person from outside that household who lives alone. Drive-in services will be permitted.”

“In order to limit the transmission of the variants of concern, the government is also restricting travel into Ontario from the provinces of Manitoba and Quebec with the exception of purposes such as work, health care services, transportation and delivery of goods and services or exercising Aboriginal or treaty rights,” the province informed.

Asked about the province’s strengthened measures, Dr. Young Hoon shared, “The province makes decisions based on what’s happening across the entire province. At this time, we are seeing a rapid increase in cases at a provincial level. This will likely have an impact on hospitals, intensive care units. At this time, there is a possibility of patients being moved from other parts of Ontario to northern Ontario and so that, therefore, has an impact on our health care system.” 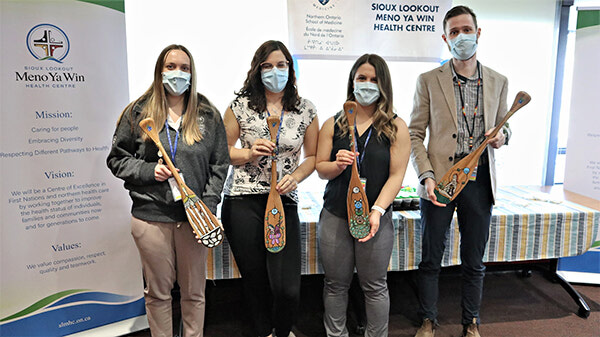