Yet another month with warmer than seasonal temperatures in Sioux Lookout has come and gone.

According to Gerald Chang, Environment Canada Meteorologist, November held a few surprises compared to historical records, stating, “It was a very mild month. When we look at the average temperature, it was minus 2.8 degrees for the entire month of November. The average should be around minus 4.9.” Chang clarified, “It was quite mild, especially in the first half of November. We had two days where we got into double digit temperatures.”

As Chang explained, this has been a trend across the north with things becoming more typical as you look further south. He stated, “That’s just not the norm for this time of year.  Across the board it was above normal for Northern Ontario, it was even milder in the far north, and even through the prairies we see that. In fact, once you get to Thunder Bay and further south, that’s when things drop back to normal for November.”

While having a warmer than usual November may have felt like a bit of a respite from our usual temperatures for this time of year, Chang expects things to bounce back to normal for the start of the New Year, stating, “I think temperatures are going to go back to normal for the rest of December and even into the early parts of January. That’s what we see right now. There will be fluctuations however, during the rest of this month, and maybe into next month.”

With temperatures in early December taking a dive into the downright chilly (Environment Canada’s website showed Sioux Lookout at a low of -27.4 on December 7), Chang added, “If you look at temperatures for next week, already we are getting back to milder territory. That seems to be the pattern, but that being said, it won’t last long because by the end of next week we should already be bouncing back to seasonal again. For the rest of December and into January we should, for the entirety of this period, be near normal.” 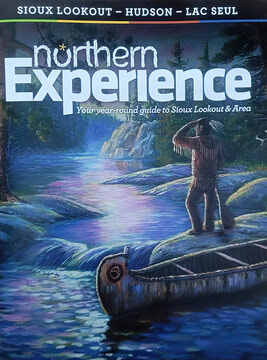 The newest edition of the Sioux Lookout Chamber of Commerce s flagship publication Northern Experience Magazine has just been released, and as readers may be quick to note, the format of the magazine is evolving...