As of last Sunday evening, the province’s Aviation, Forest Fire and Emergency Services (AFFES) reported there were 101 active fires in the northwest region.

Five new fires were discovered in the northwest region by the late afternoon of July 18 including Sioux Lookout 64 (6.0 hectares) and Sioux Lookout 65 (2.0 hectares), located approximately 9 kilometres and 12 kilometres (respectively) north of Mishkeegogamang First Nation. Both fires are not under control.

Other fires of note in the area include:

In a July 18 posting on the Municipality of Red Lake’s Facebook page, Red Lake Mayor Fred Mota advised that, “Based on all our information to date, an evacuation continues to remain likely.”

More than 100 firefighters and support staff from Mexico arrived in Ontario on July 17 to help the province fight forest fires in northwestern Ontario.

“We are thankful for the brave efforts of Ontario’s forest firefighters and all the people that support their efforts to keep our Northern communities safe,” said Greg Rickford, Minister of Northern Development, Mines, Natural Resources and Forestry. “Keeping people safe and protecting property is our top priority.”

AFFES informed last Sunday, “The AFFES team offers heartfelt condolences to the family and friends of one of our contract wildland firefighters who has passed away after being transported to hospital July 15, following a medical emergency in Northwestern Ontario.” As of July 19, no further details had been released.

Due to extreme fire hazard and increased forest fire activity, an Emergency Area Order was issued for all of Northwestern Ontario. The order will allow the ministry to, “take special measures to ensure the safety of people and the protection of critical infrastructure.”

In a July 12 news release, Nishnawbe Aski Nation Grand Chief Alvin Fiddler called on the Government of Ontario to declare a State of Emergency, “to trigger an immediate response to assist remote First Nations communities threatened by forest fires raging across northern Ontario.”

“This situation is worsening by the hour. Three of our communities have been forced to evacuate, and if fire conditions and behaviour continue on current course the potential for full scale evacuations of several communities is a reality. This is quickly becoming a NAN-wide emergency and requires an immediate, coordinated response,” Grand Chief Fiddler said, adding, “Lives are at stake, there is no time to waste.”

As of mid-week last week, Brian P. MacKinnon, Emergency Information Officer, Sioux Lookout Municipal Emergency Control Group, said, “We have not been asked to host evacuees at this time. We have offered to serve as a Hub Community (i.e., evacuees are flown into Sioux Lookout, and we welcome, register, feed, and assist with preparing to send them on other flights to their Host Communities), as well as serving as a Host Community.”

If called upon to act as a Host Community, Sioux Lookout would provide accommodations for evacuees along with meals, updates on the fire situation and access to health care among other services.

“Currently, hotel accommodations are extremely limited here in the Municipality,” MacKinnon informed.  “We have offered to host evacuees at the Recreation Centre/Arena, if the Provincial Emergency Operations Centre (PEOC) and the Leadership of the Community being evacuated deem this appropriate or necessary.”

He added, “We have held meetings with the core Municipal Emergency Control Group members to make preparations should we be asked to be a Host or Hub community, we are in regular contact with PEOC, and we remain on standby to provide assistance if called upon.”

“Due to high to extreme forest fire hazard conditions, effective 12:01 a.m. Saturday July 10, the Ontario Ministry of Northern Development, Mines, Natural Resources and Forestry has issued updated boundaries for a Restricted Fire Zone in the Kenora, Fort Frances, Dryden and Thunder Bay Districts and portions of the Sioux Lookout, Red Lake, Nipigon and Wawa Districts.  The Restricted Fire Zone will be in effect until further notice. Outdoor fires are banned. Portable gas stoves may still be used BUT must be handled with extreme care,” AFFES shared. 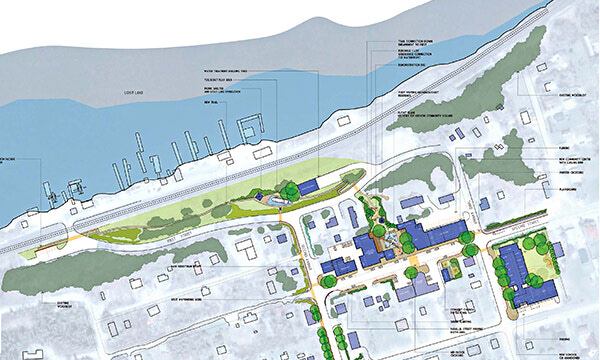 A waterfront pavilion to celebrate Hudson s aviation and boating history has been proposed to be located at the intersection of First Street and Second Avenue in Hudson...