Northern Waterworks Inc. will be running fall water distribution system maintenance between 8 a.m. and 4 p.m. until October 2nd. Public Works Manager Andrew Jewell said that the maintenance involves flushing the water distribution system via fire hydrants and that it may potentially result in discolored water as well as reduced pressures.
“If discoloration of water is discovered in a residence/building, one should refrain from running water. Especially hot water, as the discolored water will enter into the hot water tank, for the duration the flushing is scheduled to occur in the area (which is typically 8:00 a.m. to 4:00 p.m.).  Once the flushing maintenance is completed within the area, run the cold water tap until the water clears, to introduce clear water from the distribution system (water-main), into the water service line to the residence/building,” Jewell said.
This process is implemented each year, and can sometimes also be carried out twice annually. “For the main purpose of removing any build-up of materials within the water-mains such as biofilm, nodules of iron (a reaction between the water and water-mains constructed of iron) and any accumulated sediment,” Jewell said. He explained that isolating sections of the water mains and manipulating its valves in certain predetermined areas is first carried out. The hydrants are then opened, which flush the water mains in a unidirectional pattern at a high velocity. The end result helps to improve the quality of our drinking water.
Anyone with concerns about the water distribution system flushing maintenance causing disruption to their daily routines can call Public Works at 737-1234 and ask for notification of the day and time the maintenance will be conducted in their area. “The contractor conducting the maintenance notifies Public Works on a daily-basis where they plan to be working and this information can then be passed on to anyone wanting to know a more specific schedule,” Jewell said.
On September 15, the Municipality issued a notice via social media, to all recreational water users on Pelican Lake downstream of the CNR “Iron” Bridge.
Affected residents were advised that the Municipality of Sioux Lookout is currently conducting a planned bypass of one system process at the wastewater treatment plant.
The Municipality further advised that, “As a result of the planned bypass, alternate measures have been implemented to ensure treated effluent discharged into Pelican Lake continues to meet specified parameters; however, there is the possibility for an increase in E-coli bacteria to be discharged into Pelican Lake during the bypass.”
According to new Federal Standards, chlorine is no longer allowed to be present in treated effluent that is discharged into a receiving water body. The planned bypass is being implemented to facilitate construction of an Ultraviolet disinfection system to replace the chlorine disinfection system.
Jewell explained, “There are no anticipated effects as a result of conducting the planned bypass at our Wastewater Treatment Plant (WWTP) from the effluent being discharged into Pelican Lake. Alternate procedures have been implemented at the WWTP as a result of a “Bypass Plan” that was submitted, reviewed and approved by the Ministry of the Environment, Conservation and Parks (MECP) and the Northwestern Health Unit (NWHU) to ensure the discharged effluent meets the specified disinfection parameters during the bypass. To be more precise, the bypass is only bypassing one system process which involves a final stage of effluent disinfection prior to discharge; all other system processes are operating within the facility as per normal. However, because the WWTP is now disinfecting the effluent in a different manner other than how it would be disinfected during normal facility operations, there is a potential for an increase in E-coli bacteria to be present in the treated effluent (hence the public notification), however, an increase is not expected.”
The Municipality advises that people can contact Public Works at 737-1234 for more information, including the review and approval process undertaken prior to the bypass. 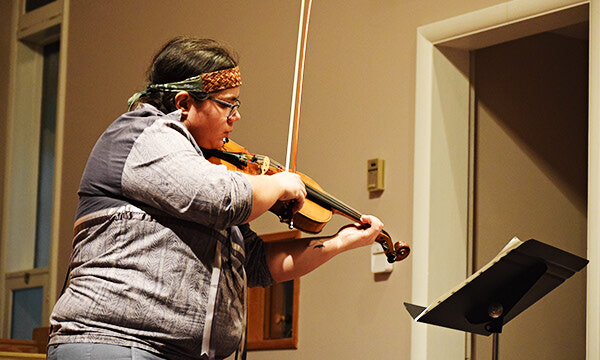 A current Sioux Lookout resident and a former resident are being featured in the Amplify television series on the Aboriginal Peoples Television Network (APTN). The series is made up of 13 episodes, and each episode is 22 minutes in length...