Fifty-five Northern Ontario libraries, including Sioux Lookout, released a joint statement on May 9 in response to recent cuts to the Ontario Library Service-North operating budget, which was announced in the 2019-2020 Provincial budget.
“Today our libraries were informed that half of the unionized staff positions (5 FTE positions) at Ontario Library Service-North have been eliminated, and a sixth reduced to part time… Additionally, 1 FTE non-union position will be eliminated at the end of this fiscal year, and another non-union position has been reduced to part-time,” the statement reads.
“The positions that were lost at OLS-North provided direct support to Northern Libraries for staff and board training initiatives, services to First Nations Libraries, technology consulting, policy and strategic planning consulting, website development for small libraries, the administration of joint purchasing agreements and support for the Joint Automation Server Initiative (JASI) program, which provides essential library software to 133 rural and Northern library systems across Ontario.”
Sioux Lookout Public Library CEO and Chief Librarian Mike Laverty shared the importance of these consultant services for northern libraries.
“The whole point of these agencies is they’re sort of like professional consultants. Their whole   day job is to field questions from public libraries and give them expertise. You get a lot of libraries in northern Ontario that have one or two employees that are really struggling to kind of operate their libraries, and then they rely upon this agency to be a sounding board for them and to help them with training, deal with policies, and legislation. We’re a bit fortunate in Sioux Lookout. We have more staff then some of those libraries do, but it’s a really important training, resource, and consultation,” Laverty explained.
Along with consulting and joint purchasing services, Laverty shared that he’s concerned for Sioux Lookout and other Northern libraries that could see an increase in workload due to potential cuts to tech support services.
“One of the biggest things that I’m concerned about is we have library software, so it’s very specific software that runs the library like what patrons have checked out and what’s in your collection. It’s very specialized software that’s secure and people’s information is kept safe and private. What we do is get a lot of tech support from these library service agencies, so we get a ton of tech support, resources, and assistance with running our library systems. If that goes away or that service gets diminished, each individual library then has to run their own system or run their own tech support. It’s basically downloading a lot of work on to each individual library,” he said.
“A lot of First Nations communities have public libraries, and they almost exclusively rely on Ontario Library Service-North,” he added.
The joint statement went on to say, “It is now clear that provincial cuts to the Ontario Library Service will impact programs and services beyond Interlibrary Loan. The diminished capacity of OLS-North to deliver those programs will negatively impact our public libraries, and we believe that even programs and services that are maintained will operate at a reduced capacity due to extensive personnel cuts… We believe these cuts have disproportionately and unfairly impacted libraries in Northern Ontario and jeopardize our ability to provide equitable library service in the North. We are also dismayed that the Government chose to make these cuts without undertaking any consultation with Northern libraries about what the impacts could be on our organizations and   our patrons.”
“We are calling on the Government of Ontario to halt these cuts, restore valuable jobs in Northern Ontario, and undertake consultation to understand the impact of these   cuts to Northern libraries,” the statement   concluded. 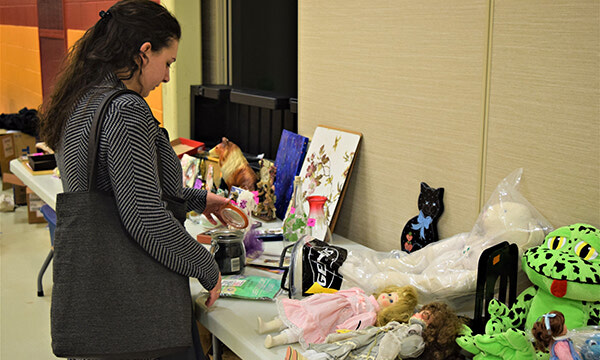 Sioux Lookout residents had the chance to buy tasty treats and find some new treasures during the Sioux Looks Out For Paws indoor yard and bake sale at Sioux Mountain Public School on May 11.