North Spirit Lake First Nation declared a State of Emergency on Oct. 24, "as an escalation of drugs fueling the addiction epidemic and a breakdown of the community’s water system has caused widespread crisis," according to a news release issued by Nishnawbe Aski Nation on behalf of the community.
“Our community has been devastated by an influx of drugs and breakdowns in vital infrastructure. Our people are suffering, and we are beyond our ability to respond with the necessary supports”, said Chief Caroline Keesic. “We had no choice but to call this State of Emergency as we require an immediate response from the appropriate federal and provincial agencies with resources to support our members suffering from harmful addictions and to help leadership stabilize the community.”
The news release goes on to state that, “There have been interruptions in essential services such as power and water due to lack of operational personnel. North Spirit Lake leadership, community workers, NAPS police officers and nursing staff are operating at maximum capacity. There is no doubt that the crisis situation will worsen without a coordinated effort by all appropriate governmental departments, agencies and partners to deploy critical resources and relief.
“Community leaders are working non-stop to coordinate an emergency response and are doing everything possible to ensure that mental health and counselling supports are available to the community, especially for high-risk members who need urgent medical attention and specialized care.
“The remote Oji-Cree community has suffered for years from long-standing issues stemming from severe addiction and mental health issues. These have been exacerbated by a recent influx of drugs in the community, leading to a significant shortage of services and resources critical to the effective management of crisis relief for community members and workers.”
Nishnawbe Aski Nation (NAN) Grand Chief Alvin Fiddler released the following statement in support of North Spirit Lake First Nation, “Chief and Council are overwhelmed and the situation is beyond their ability to continue to cope alone. We are mobilizing an emergency response to provide immediate assistance and are doing everything we can to try to stabilize and support the community. We are coordinating shipments of food, clothing and other supplies that will be sent to the community as soon as possible. We are also arranging for a crisis team to reach the community as quickly as possible to provide mental health and other supports. We know the community is in crisis and we want the people of North Spirit Lake to know that help is on the way. We are trying to address their immediate needs and will work with Chief and Council to improve infrastructure and addiction treatment programs for the long-term health of the community.”
Sol Mamakwa, Kiiwetinoong MPP and NDP Indigenous Relations and Reconciliation critic, issued the following statement following the State of Emergency declaration: “We call on the Ford government to stop standing by and using the excuse of jurisdiction to not step forward and help communities in crisis. North Spirit Lake First Nation has been forced to declare a state of emergency to deal with a long standing water crisis, and an addiction epidemic that is only getting worse.
“Families have been dealing with a breakdown of essential services like electricity and power, while their sewage system backs up due to faulty pipes and pumps. Last winter, elementary school officials were forced to haul water from the lake to power the school’s sewage system and shorten school days due to health concerns for the students.
“Teachers and nurses have been forced to leave the community because of a lack of these basic services needed in schools to teach children and in medical facilities to treat patients.
“Families are living without the basic services all Ontarians should have to ensure their safety.
“The Ford government must stop ignoring First Nations communities in the Far North, and take immediate action on providing medical help, mental health and addiction supports, and community infrastructure upgrades urgently needed by families in North Spirit Lake First Nation.” 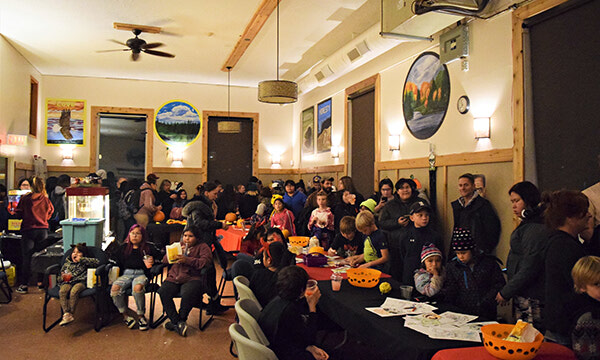 Hundreds of Sioux Lookout and area residents helped the Nishnawbe-Gamik Friendship Centre kick off their Christmas Hamper Drive by participating in their annual haunted house on Oct. 26.