Singer-songwriter and former Sioux Lookout resident Nick Sherman announced that he will be performing at the National Arts Centre in Ottawa on Sept. 20.
“I have an existing relationship with the National Arts Centre, and just even performing around Ottawa. I’ve been touring around Canada for probably over five years now. I’ve been working my way up and making sure that I’m always going back to the places where I want to play. The National Arts Centre show came about around six months ago. My manager got an email from them, and they wanted to add me to their list of Canadian songwriters that they’re going to be featuring over the fall… I was very fortunate to be asked to be a part of that lineup,” Sherman explained.
The National Arts Centre will be one of many notable performances for Sherman, which have included the Luminato Festival in 2017, Vancouver Folk Festival in 2017, Northern Lights Festival Boréal in 2017, Bella Coola Music Festival in 2016, Ottawa Bluesfest in 2015, Pan Am Games in 2015, Calgary Folk Festival in 2014, and Aboriginal Music Week in 2013.
Along with announcing the upcoming performance, Sherman also shared that he is releasing a new album this fall. The album is going to be called Made Of.
“The album will be coming out on November 1, but the single Made Of will be released before that,” he said.
“I’m really excited to be releasing new music. It’s been about four years since my last release, and I’ve had a really amazing time playing shows all over Canada… It’s been really nice to do that with my last album, but also having the time to create new music and create songs that reflect things that I’ve gone through, reflect things that communities in the north were going through, and reflecting things that I know about and that are happening in places around me because I always try to be as connected as I can with the north and northern communities. Those are the kinds of stories I like to tell, so I’m really happy to be able to have a new album to tell more of those stories,” he continued.
Sherman was born and raised in Sioux Lookout where he completed high school at the former Queen Elizabeth District High School. He now calls Thunder Bay his home, but Sherman shared that he cherishes his Sioux Lookout memories as he continues to find success in his music career.
“When you’re a performer you really cherish the special moments that you have on stage. As a performer you’re going to have, probably, the best times of your life on a stage and you’re also going to have the worst times of your life on stage. It always varies, like anything, there’s always good and there’s always bad, and you do it because you love it. Some of my fondest memories of being on a stage are being on the Sioux Mountain Music Festival stage, playing with friends, being up there with a supportive audience, being up there with my own songs, being able to share those songs, and then knowing that the people in the audience were connecting and it was about our community and our area. Having an opportunity to do that is rare, it’s very special, and not everyone gets that, so I really reflect and think about those moments. I always carry those moments so that I remember what that is like. There is possibilities to make those kinds of connections and that’s where I experienced it first, so I always remember playing in Sioux Lookout, I always loved playing in Sioux Lookout, and I hope I get to play at the Sioux Mountain Music Festival again with this new record that I’m putting out… Sioux Lookout was my base for getting my feet wet with music, playing with friends, getting bands together, and writing my own songs,” he shared.
To stay up to date on Sherman’s upcoming album and performance dates, he recommends checking out his website.
“The first place to look, and there’s going to be a huge update coming up soon, is by going to nicksherman.ca. On the website, in the next few weeks, that’s all going to change and there’s going to be a whole roll out on what’s happening next with my music. There’s going to be singles, videos, and an update of shows. That’s going to be happening soon,” he said.
Sherman can also be found on Twitter, Instagram, and Facebook by searching @NickShermanMusic. 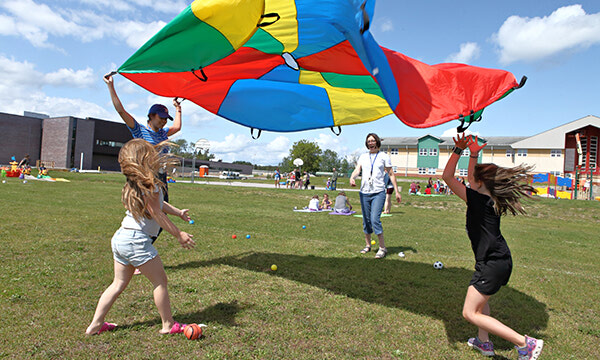 Firefly Sioux Lookout set up a variety of play centres for families and children on the Sioux Mountain Public School field on August 7. Activities included an obstacle course, sidewalk chalk, and fun and games with a parachute.