Three and a half years ago the remote fly-in First Nations community of Neskantaga, located 433 km's north of Thunder Bay, entered into a revenue-share agreement with North Star Air. “Revenues generated from North Star Air community partner agreements are designed to distribute funds back into the community for future investments in social, economic and infra-structure projects” explains CEO Frank Kelner.
On July 26th, three North Star Air representatives travelled to the remote community with cheque in hand of Neskantaga’s revenue share to date. After preparing a BBQ celebration for over 200 community members, a cheque in the amount of $304,116.69 was presented to Chief and Council by Vice President Tom Meilleur and Vice President of Commercial Operations Jeff Stout.
Chief Chris Moonias states “It’s a chance to partner with a very good company and we were able to benefit from that, that’s what we’ve always wanted, is a community that deals with companies that come and work in our areas. I think it’s important that we’ve become part of the economic development. We signed this agreement to benefit from it, to do some programming or re-investment to further economic development opportunities.” Neskantaga Chief and Council will be holding a community meeting later this month to discuss how the funds will be directed.
North Star Air partner communities also benefit from competitive rates for passenger, charter and air cargo services. Neskantaga First Nations is one of 12 First Nations communities that have entered into agreements with North Star Air since the program’s inception in 2016.
“Since our revenue share agreements inception, we’ve given back over $3 million dollars to our partner communities” states Meilleur, “we’re all about people, and creating opportunities within remote First Nations communities in the North.” 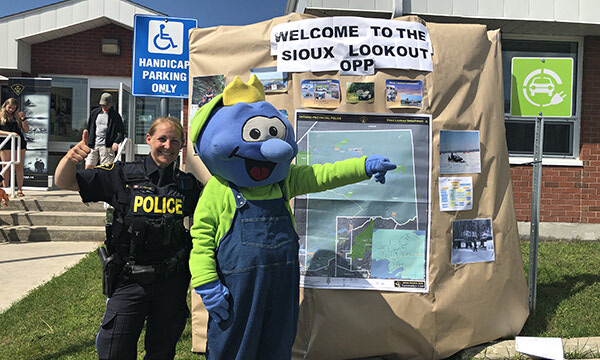 More than 200 people visited the Sioux Lookout OPP detachment at 62 Queen Street in Sioux Lookout during this year s Blueberry Festival as part of an OPP Open House and Community Safety Day on August 4.