Things are heating up in the Kenora Riding leading up to this fall’s federal election.
On April 30, Eric Melillo was acclaimed as the Conservative Party of Canada candidate for the Kenora Riding.
The Kenora resident is currently completing a degree in Economics at Lakehead University.
Melillo has previous employment experience as a political staffer, associate within a consulting firm, and public policy researcher.
“It’s time for new representation in the Kenora riding. This government has betrayed the trust of northerners by failing to deliver for our communities,” said Melillo.
Melillo believes fiscal responsibility should be top of mind for the government saying “More debt today means less services and higher taxes for future generations. It is irresponsible and we must change course.”
On May 14, Kenora MP Bob Nault announced his intention to again run for the Liberal Party of Canada in the next federal election, scheduled to take place October 21st.
“As a Northerner first, and as the federal representative for the Kenora Riding for 20 years, I am honoured and pleased to announce that I am running to be the Liberal candidate in the 2019 election.
“Living in the North is truly a privilege and it comes with its own very unique set of challenges, including safe and reliable transportation, access to healthcare, reliable broadband connectivity, and protecting our environment. To address these very real challenges head-on, the voice of Northerners must be heard; we must continue to work together to ensure the North reaches its full potential.
“The reason I am running again is simple. Under Stephen Harper’s Conservatives, we saw our region fall further and further behind. Investments for essential programs, like FedNor were severely reduced or cut altogether. We saw infrastructure, like our local highways, airports, and community buildings, fall into disrepair, putting the North at a serious disadvantage if we want to attract new industry and create more jobs for Northerners.
“Now, we have federal Conservative leader, Andrew Scheer, who is a carbon copy of Stephen Harper and sounds just like Doug Ford. Northerners cannot afford another federal Conservative government, nor can Ontarians, nor the country. That’s why I am running,” Nault stated. 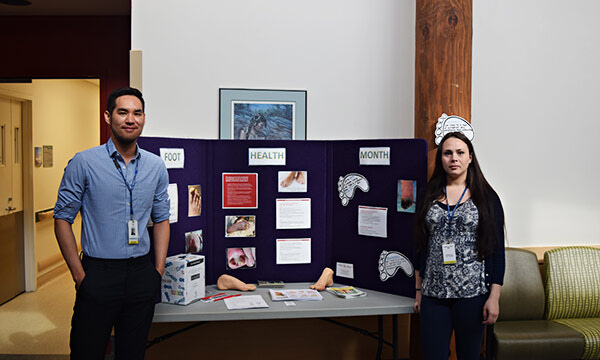 The Sioux Lookout Meno Ya Win Health Centre (SLMHC) is promoting healthy feet throughout the month of May.