Several local organizations and area leaders did their part to shed light on this issue last week.

Nishnawbe-Gamik Friendship Centre Executive Director Jennifer Thomas shared, “The Nishnawbe-Gamik Friendship Centre hung a Red Dress in our window to provide a visual reminder to the community to raise awareness of this ongoing epidemic in which there are over 1000 missing and murdered women, girls and 2SLGBQT individuals in Canada. It is important to keep this at the forefront of Canadian consciousness to affect change and continue this call for justice for all of our Stolen Sisters. Red Dress Day started as an Art Project by Jamie Black, a Metis woman, who used a Red Dress to honour and raise awareness of our Missing and Murdered Indigenous Women and Girls, and continues to be a powerful reminder of these precious lives lost”.

Sioux Lookout First Nations Health Authority (SLFNHA) encouraged community members to wear red and share a photo with SLFNHA, which they compiled on their Facebook page. “We wear red to raise awareness for the missing and murdered Indigenous women, girls, and two-spirited people,” SLFNHA shared in a post on Facebook.

Grand Council Treaty #3 with support of the Women’s Council Gaagiidoo-Ikwewag shared their support in a media release to raise awareness on the issue of Missing and Murdered Indigenous Women and Girls. It stated that Grand Council Treaty #3 would continue to advocate for MMIWG, their families and those impacted by the issue of MMIWG to ensure the Canada National Action Plan is designed and delivered to meet the needs of the people.

Member of Parliament for the riding of Kenora, Eric Melillo shared on Twitter, “Today we honour the memories of missing and murdered Indigenous women, girls, and two-spirited people, and mourn along with their loved ones.” He added, “Victims and their families have waited long enough. The government must deliver a National Action Plan to put an end to this national tragedy.”

The Government of Canada’s website (https://bit.ly/3f75DZZ) states, “Eliminating violence against Indigenous women and girls is an urgent issue in Canada. The Government of Canada is committed to addressing the systemic causes of violence and increasing the safety of Indigenous women, girls and LGBTQ and Two Spirit people.” It added, “In 2016, the National Inquiry into Missing and Murdered Indigenous Women and Girls was launched as a key government initiative.”

The website further explains that the National Inquiry conducted in-depth study and analysis between September 2016 to December 2018 on Missing and Murdered Indigenous Women and Girls, including LGBTQ and Two Spirit people, presenting its far-reaching Final Report in 2019 that deals with many underlying systemic issues. The website states that the Government of Canada is committed to ending the ongoing national tragedy against several individuals, and to help prevent and eliminate violence against them in future generations.

According to Royal Canadian Mounted Police’ 2013 National Operational Overview of Missing and Murdered Aboriginal Women, there are a total of 1,181 police-recorded incidents of Aboriginal female homicides and unresolved missing Aboriginal females – 164 missing and 1,017

The Government of Canada’s website states, “While Indigenous women and girls made up only 5% of Canada’s total female population according to the 2016 Census (Statistics Canada, 2018), they account for 23% of all women and girls murdered in Canada between 2014 and 2018.”

Minister of Crown-Indigenous Relations Carolyn Bennett shared in a statement, “Today, our hearts are with the families and survivors as we mourn and honour Missing and Murdered Indigenous Women, Girls and 2SLGBTQQIA+ (Two Spirit, lesbian, gay, bisexual, transgender, queer, questioning, intersex and asexual plus) people. On Red Dress Day, we reflect, grieve, and continue our work together towards ending this ongoing national tragedy.”

Bennett added, “Canada’s colonial past has had a lasting and negative impact on Indigenous communities. Canada’s history, along with sexism, ableism, racism, homophobia, transphobia as well as the actions and inactions of past governments created systemic discrimination and inequities, which must be addressed in order for Indigenous women, girls, 2SLGBTQQIA+ people to be safe wherever they live.” 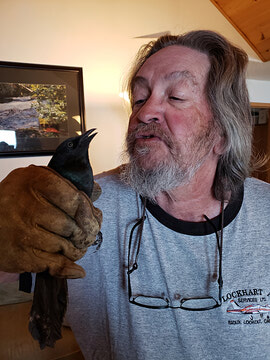 We didn t waste much time boating to camp as soon as the ice left our lake April 27. The weather was beautiful, an early spring treat, with lots of sun and temperatures in the high teens (60s F).
Squirrels had discovered my cache of sunflower seeds...