The 2018-19 Sioux-Hudson Entertainment Series wrapped up on March 19 with a stellar performance from the Thunder Bay Symphony Orchestra during their biennial visit to Sioux Lookout.

Prior to the show, Entertainment Series committee member Alyson Martin, on behalf of the entire committee, honoured and acknowledged their longest-standing member, Nancy Dedon.

“The Entertainment Series committee would like to acknowledge and show our appreciation for our longest standing committee member Nancy Dedon and honorary member, her husband, Roy… Both have worked hard and, inevitably, earned their right to retire and enjoy the shows without doing any of the pre-work involved…The committee would like to make sure both of you can continue to join us at future series’ and, to ensure this happens, we would like to provide you with a life-long couples pass,” said Martin during the pre-show ceremony.

“I’ve enjoyed working on the committee and seeing all of you here every time we have a concert; it makes it all worthwhile,” shared Nancy Dedon as she addressed the crowd.

When asked about honouring the Dedons, Martin shared that the current state of the Entertainment Series wouldn’t have been possible without them.

“This town and surrounding communities are built on volunteerism… these are people who really had a vision and said let’s have a formalized, professional touring series. It started off in smaller numbers, there was a lesser number of shows, and less finances as they were trying to build it up, but if it wasn’t for people like Nancy, Roy and all of the other people before us there wouldn’t have been a trail blazed for all of the rest of us to be on it and to keep it moving forward,” she explained.

The evening not only wrapped up the current season, but it also marked the end of an era for the Sioux-Hudson Entertainment Series at the formerly named Queen Elizabeth District High School. Martin confirmed that the plan is to host the majority of their future shows at the newly constructed Sioux North High School, which features a new cafetorium.

“Everyone just moved over to the new school and it’s very exciting. I was kind of getting emotional (during the pre-show) because we’ve been so rooted and connected to this space… We’re going to be looking at the new space. Most of the shows, of course, will be there. We will be checking out to make sure that larger performances like dance and the symphony will be able to work in that space, but it is our hope and our plan to be able to present at the new space,” Martin explained.

“It is a lovely location. A lot of thought went in to the design and a number of the things you need to enhance the production value of our performances, so the school really made an effort to include us. Bob Johnson, who is one of our committee members and is quite knowledgeable in the world of theatre and performing arts, was really at the table a lot with folks, and they had a special consultant who also really looks at the cafetorium and building auditoriums in schools. It was a real honour to be part of that… I would say yes, that is where we are primarily going to be,” she added.

When asked about this past season, Martin shared that they were happy with the overall mix and dynamic of the lineup as well as audience members too.

“We really enjoyed having a season that had a mix of seasoned veterans and emerging artists, which is what we really like to showcase. Our audience is really open to the different groups that come through. We also feel really lucky with the diversity of people in the crowd. We got all different ages. We have a number of younger people that come to the performances with their parents and even a number of students who are venturing out on their own and able to participate as audience members on their own,” she said.

As for the next season of the Sioux-Hudson Entertainment Series, it is already lined up with a wide-variety of genres and options for audience members.

“It’s really a great, eclectic mix. We have country, folk, dance theatre. It’s everything and more, so we’re really excited about the lineup,” Martin concluded.

To stay up to date on show dates, locations, and ticket sales check out their website www.siouxhudsonentertainmentseries.ca. 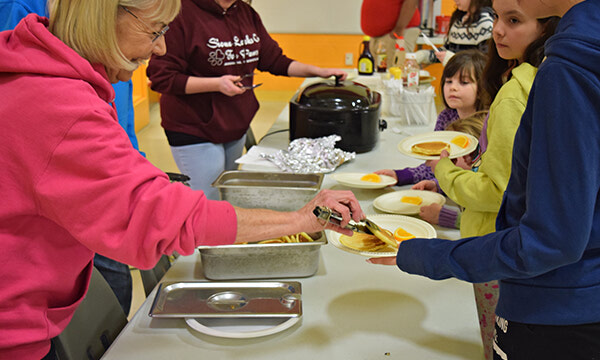 Good eats for a good cause