Ontario’s strategy to act on the Calls for Justice in the Final Report of the National Inquiry into Missing and Murdered Indigenous Women and Girls is being acknowledged by Nishnawbe Aski Nation (NAN) as a “significant contribution” to the National Action plan.

Announced on May 27, the provincial government said in a news release that the strategy, developed in collaboration with Indigenous partners,  “addresses critical gaps in supports for Indigenous women, children, and Two-Spirit, Lesbian, Gay, Bisexual, Transgender, Queer, Questioning, Intersex, Asexual, plus (2SLGBTQQIA+) people, including the need for better access to stable housing, health care, education and employment.”

Pathways to Safety: Ontario’s Strategy in Response to the Final Report of the National Inquiry into Missing and Murdered Indigenous Women and Girls includes 118 initiatives organized under six pathways that will help create the changes required to eliminate the root causes of violence and advance meaningful reconciliation.

The Pathways for Action are:

Pathway to Security - Initiatives that promote safety, healing and wellness through prevention-focused resources, investments and programs, such as access to safe and affordable housing.

Pathway to Health - initiatives that will promote safety and improve access to services including mental health supports for Indigenous women, children and justice-involved youth.

Pathway to Justice - initiatives that will contribute to system-wide transformation in priority sectors including policing services and child welfare.

Pathway to Responsibility and Accountability - principles that will be upheld to promote ongoing government accountability in collaboration with the Indigenous Women’s Advisory Council and Indigenous organizations.

“The tragedy of violence towards Indigenous people is completely unacceptable and must be met with real solutions to uproot the causes,” said Jill Dunlop, Associate Minister of Children and Women’s Issues in the provincial news release. “We listened carefully to the survivors, families and loved ones who participated in the National Inquiry. We also collaborated closely with Indigenous partners, including members of the Indigenous Women’s Advisory Council, to ensure their voices guided Ontario’s action plan on the critical issues impacting their communities. I am proud of where we have come but know there is much more work to be done to ensure all Indigenous people can live in safety, free from violence.”

As part of Ontario’s strategy, the mandate of the Indigenous Women’s Advisory Council has been extended beyond March 2022.

“We are deeply grateful for the leadership from Indigenous partners and organizations who have shaped the vision for Ontario’s path forward to address the root causes of violence against Indigenous women and children,” said Greg Rickford, Minister of Indigenous Affairs in the news release. “We will continue moving forward in partnership as we take action to address the gaps in government support for survivors and create a secure future by enabling better access to safe, accessible, stable housing, and education and employment opportunities.”

NAN Deputy Grand Chief Walter Naveau shared in a May 27 statement, “On behalf of Nishnawbe Aski Nation I acknowledge all women, girls and 2SLGBTQQIA+ people who have gone missing or have been murdered. Our hearts are with their families, survivors and communities.”

He further stated, “We thank the Indigenous Women’s Advisory Council and Ministers Dunlop and Rickford for the collaborative efforts to ensure this strategy was developed with Indigenous women and organizations leading the way. Developing the priorities and actions required to support the unique needs for safety and healing for the women, girls and 2SLGBTQQIA+ people in First Nation communities would not have been possible without having their voices at the forefront. This Strategy is a significant contribution to a National Action Plan, and we expect it to be incorporated in a federal approach.”

The Provincial Government’s strategy was developed in partnership with the Indigenous Women’s Advisory Council (IWAC), a collaborative effort from Indigenous organizations across the province who advised the province on violence prevention. NAN was represented on the IWAC by NAN Women’s Council member Theresa Sutherland, a member of Fort Albany First Nation.

NAN informed that, “The Strategy lays out pathways to safety with NAN-specific projects including: 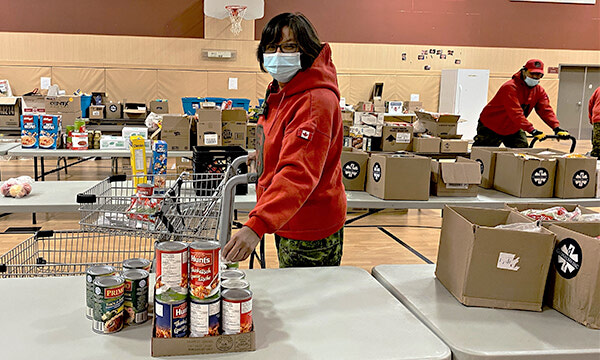 A small number of Canadian Rangers are playing a big part in helping a small First Nation cope with a serious outbreak of COVID-19...