Organizers of the Sioux Mountain Music Festival had to think outside the box to make the festival happen this year, which they did by taking the festival online.
Presented by the Nishnawbe-Gamik Friendship Centre, Sioux Lookout Multi Cultural Youth Centre bands, local area bands and northern bands, along with solo performers, took part in the online music festival on August 2, which was headlined by former Sioux Lookout singer/songwriter Nick Sherman.
Program Coordinator Tommy Kuzemczak explained that the online music festival was a mix of pre-recorded performances and live performances from the Multi-Cultural Youth Centre.
“The Nishnawbe-Gamik Friendship Centre delivered the opening ceremony and Allan Walski pre-recorded the opening ceremonies. All of the dignitary speeches were pre-recorded. Dan Fraser, who was the MC for the day, did an acoustic set as well. Serena Saudino’s performance was pre-recorded, Mike Laverty was live. The Penner duo were pre-recorded. The Tyrell Monias project was live. Bloodline were pre-recorded. True North were live. Deer Lake Ontario’s Band of Brothers were pre-recorded from Deer Lake. Variable Pitch performed live. The Edwards Brothers were pre-recorded. Stix n’ Strings were pre-recorded. From Quebec City and Dryden Ontario - the Opera Blue performed live. Big Trout Lake’s Sagatay were pre-recorded from Big Trout Lake Ontario. Hot Mess performed live. Thunder Bay’s Luke Warm and the Cold Ones were pre-recorded from Thunder Bay and the Headliner Nick Sherman performed live,” Kuzemczak explained.
“Everyone worked really hard all day to make this dream happen! This year we proved that we could make an online festival into a success. At the end of the festival there were 3,400 views on the Sioux Mountain online Music Festival 2020’s livestream and an unknown amount of viewers on Nishnawbe-Gamik Friendship Centre’s YouTube page. Now we’re really looking forward to next year’s Sioux Mountain Music Festival 2021. I want to thank all of the musicians who performed, Jennifer Thomas and the Board of Directors of the NGFC for believing in me, Dan Fraser, Carlton Blackhawk, Jeff Hindy, Victor Lyon, Paul Matousek and the Staff at the Nishnawbe-Gamik Friendship Centre for making this Festival a Success,” Kuzemczak concluded.
The entire music festival can be viewed by visiting The Sioux Mountain online Music Festival 2020 on Facebook. 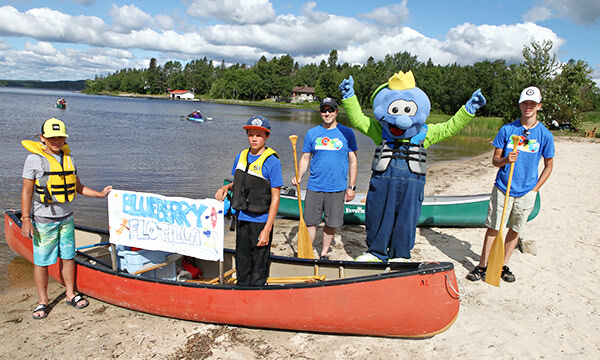 Blueberry Flotilla has best turnout yet

Canoers, kayakers and paddle boarders toured the Pelican Lake shoreline on August 2 as part of the third annual Blueberry Flotilla.