The Municipality of Sioux Lookout is looking for input from the public regarding, “the potential elimination of a property tax rebate program for vacant commercial and industrial properties and the subclass tax rate discounts applicable to vacant commercial and industrial land.”
Feedback can be provided through an online survey and submission form prior to June 14.
The Municipality shared through a media release, “The tax rate reduction system for vacant land and the rebate program for vacant units were introduced in 1998 and 2001 respectively as means of more closely mimicking the effects of the Business Occupancy Tax system that was repealed at the end of 1997.
“Vacant commercial and industrial class land is currently subject to discounted property tax rates compared to similarly classified property on which there are buildings. This is administered by way of property sub-classes assigned by the Municipal Property Assessment Corporation (MPAC) based on regulated criteria.
“The Vacant Unit Rebate program allows owners of commercial and industrial buildings to apply for a partial rebate of property taxes if all or part of the property was vacant for at least 90 consecutive days and various other criteria are met.”
The media release goes on to state, “While the sub-classes have generally been less of a concern, the rebate program has been marked by some critical weaknesses since its inception and has become increasingly problematic over time. Conceived to address temporary and sporadic conditions, many properties remain eligible for years at a time or indefinitely, thereby receiving ongoing vacancy rebates while also realizing assessment based reductions to reflect persistently low occupancy rates.
“The Municipality, like many municipalities across the province, has found the program to be increasingly difficult to manage, budget for and administer. The application and enforcement of eligibility criteria has become particularly difficult due to loosely defined rules and limited compliance provisions.
“As of 2017 the Province has provided municipalities with broad flexibility to tailor the treatment of these vacant land and unit programs in response to local circumstances. After careful review Municipal staff have recommended that the vacant unit rebate program be eliminated based on the limited benefit it conveys, the pervasive compliance issues and high administrative costs ultimately carried by all taxpayers.
“The Municipality also intends to seek permission to eliminate the tax rate discount percentage for vacant (and excess) land.
“Input regarding the potential implications of these changes is being sought from landlords, business owners and members of the general public and will inform the final decision making process.”
Survey and comment forms are available online at https://secure.mte.ca/siouxlookout/, or they can be picked up in person at the Municipal Office, located at 25 Fifth Avenue.
“In addition, an online information session will be held to give participants the opportunity to ask questions and dialogue directly with staff and the session facilitators. This webinar will begin with a brief presentation to overview the program background and the factors behind the changes being contemplated,” the media release concluded. 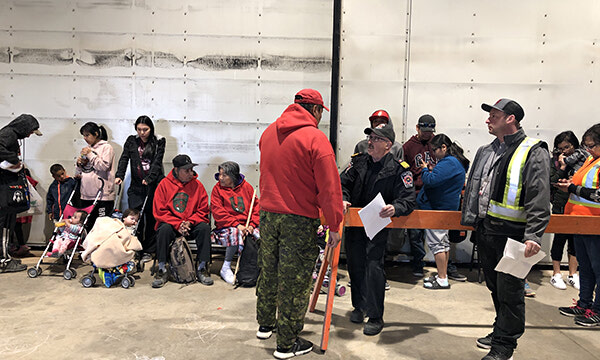 Red Lake 14, a wildfire which has been threatening Pikangikum First Nation, is being held as of the evening of June 9, according to the Ministry of Natural Resources and Forestry s Aviation, Forest Fire and Emergency Services (AFFES).