The Municipality of Sioux Lookout shared on their Facebook page that the Environment Committee is pleased to recognize George Hoggarth for Encouraging Environmental Awareness and Stewardship. It stated, “George is the epitome of the statement “one who walks the talk!” He believes in the many “R’s”. George reduces his carbon footprint by cycling 365 days a year - you’ve probably seen him on the street all winter!  He reuses items like pallets to create fencing too.” He has also built a greenhouse in his backyard using discarded aluminum store doors.

Hoggarth said that he believes in the saying that if you are not part of the solution, you’re part of the problem. He added, “It is always satisfying for me to see that I am actively working on solutions to our environmental challenges.”

Hoggarth, also an avid gardener, and a vegetarian since 1978, follows a lifestyle that contributes to environmental wellbeing, as much as possible. “He utilizes his whole yard to create his locally sourced food. He composts, cans, and preserves his harvest. George carries reusable cups, plates and cutlery so he is always at the ready. He even uses hankies!” the post further mentioned.

Hoggarth said that individual efforts often create a larger momentum of our actions. “We as individuals should try to examine our lifestyle, and look at how we could change some of our habits to...walking more lightly on the Earth. It is not only just the individual contributions that each of us can make. But, it also creates in our society, a recognition that we have to change things.”

Hoggarth said, “I think that it’s important for people in our community to feel strongly about sustainable living, to support the efforts of others in doing that, including the Environment Committee, because the Environment Committee has taken on a number of goals and the more support we get for those goals, the more likely we’ll be able to accomplish them. For example, the composting survey that went out. The more people are willing to participate in that program, the more likely it’ll begin to be operational.”

A community volunteer and Committee lead for this initiative, Anne Saltel, shared that the Committee had been wanting to nominate Hoggarth for a while, but thought that people might consider the nomination as a conflict of interest since he also serves on the Committee. She added, “George really is the ultimate in making a difference for the environment so when he was away one meeting, we nominated him.”

“It’s great to be recognized. I appreciate the recognition. I hope that this can inspire other people to look at their lifestyle and see if they can do things differently to reduce their carbon footprint,” Hoggarth said. He added that over the years, the Environment Committee has recognized several individuals and organizations who are also working towards more sustainable living and that he hopes that the Committee is able to recognize a lot more people over the coming years.

People who know of an organization or individual that is exemplifying the promotion of environmental education and/or undertaking good environmental stewardship can email Saltel at [email protected]. 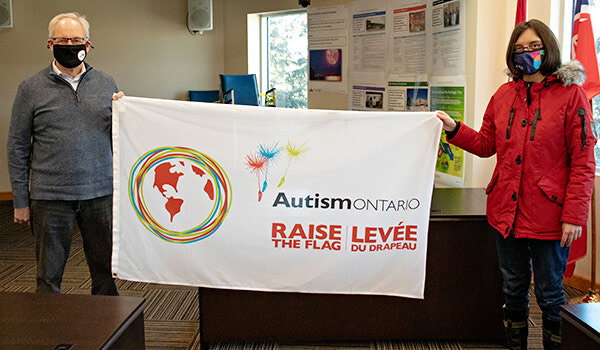 ioux Lookout Mayor Doug Lawrance proclaimed April 2 as World Autism Awareness Day in the Municipality of Sioux Lookout to raise awareness about Autism Spectrum Disorder (ASD). The flag for Autism Ontario s Raise the Flag Campaign was hoisted at the...