Current & Projected Loan Breakdown
Council received the Treasurer’s Report No. 2021-33, dated February 17, 2021, regarding Current and Project Loans Breakdown.
The purpose of the report was to update Council on current loan payments and projected loan payments on approved future Capital Projects.
In her report Treasurer Carly Collins shared that, “Over the next five years, the Municipality will complete four loans totaling $142,242.67 in payments. However, with the current projects to be completed along with the approved projected loans needed, the Municipality will be placing 19 new loans totaling $1,066,011.64 per year in new payments.”
Bigwood Lake Development Project
Council authorized a funding application to the Northern Ontario Heritage Fund Corporation (NOHFC) for $1,000,000 and FedNor for $1,431,498 under the Strategic Economic Infrastructure Program(s) and $1,431,498 from a Private Sector Partner, to develop the Bigwood Lake property, for a total project cost of $5,319,526; and further Council authorized a Municipal contribution of $1,456,530, and agrees to cover any cost overruns.
Vicki Blanchard, Economic Development Manager, shared in her report to council that, “In 2019, the Municipality finalized their Official Plan update and amendment which identified the east side of Sioux Lookout as the area for commercial and residential expansion. This was recommended in the Commercial and Industrial Growth Plan funded by the Province and Federal governments
in 2017-2018.
“In addition, in 2019 the Municipality requested the support of the Provincial and Federal governments to extend water and sewer services from the Sioux Lookout Regional Airport over to the Bigwood Lake property located across from the Airport. The purpose of this request was to commence marketing the property to developers and investors. At the time of the request for the service extension the Municipality was negotiating a new hotel/conference centre to be located on the Bigwood Lake property.
“The negotiations have attracted a First Nation Business Partner who wants to build a hotel/conference centre which would provide up to a hundred new full and part-time jobs. This has also attracted other developers who want to create a community around the commercial development which will attract other commercial investors such as restauranteurs, manufacturers, franchises, etc.”
Blanchard further shared in her report, “After two privately funded feasibility studies it was determined Sioux Lookout requires 200 more rooms especially with COVID-19 and the changes to business and health care travel and accommodations. It should also be noted that in 2019 Sioux Lookout First Nation Health Authority confirmed over 98,000 overnight stays in Sioux Lookout. In recent, weeks we have confirmed that the Sunset Inn has applied to convert the building into Affordable Housing units under the Rapid Housing Initiative removing an additional 68 rooms from the local inventory which equates to the need to accommodate 300 additional rooms.
“In January 2020, the Municipality commenced negotiations with three other developers;
1) to build town houses on 1B of the site plan, and 2) to build three 40-unit apartment complexes on 1C of the site plan. The housing crisis as declared in the National Housing Strategy is affecting human and economic potential from coast to coast. Unprecedented housing market pressures pose an unparalleled threat to our future economic prosperity. Note: There are 240 professional jobs available in Sioux Lookout.
“The economic impact of not filling these jobs due to no available accommodations or housing is proving to be crisis within a crisis during COVID.”
At their Jan. 20 regular meeting, council authorized and directed the mayor to execute a Memorandum of Understanding (MOU) on behalf of The Corporation of the Municipality of Sioux Lookout in regards to the Bigwood Lake Project.
Blanchard further shared, “The purpose of the MOU is to facilitate cooperation among the Parties and to identify potential opportunities for collaboration in order to explore and assess the possibility of developing and carrying out the development of the Bigwood Lake Property including constructing up to three Multi-Unit Apartment Complexes, and Hotel/Conference Centre on the Bigwood Lake Property.
“Under General Cooperation (item 3 of the MOU) that Sioux Lookout alone or together with the Parties would provide Preconstruction Services for the Bigwood Lake Property development. To date, the partners have applied for funding through NOHFC and FedNor under Strategic Economic Infrastructure program to assist with the pre-construction services and were approved to advance to a Phase 2 application.”
The partners, Fusion Capital, Happy Time Tours and Travel and Econeem International Corporation, are contributing approximately $1.4 million dollars towards the development of the property.
Ontario Regulation 284/09 – Compliance Report 2021
Council adopted the compliance report for expenditures excluded from the 2021 budget as outline in the report dated March 17th, 2021 as a requirement of Ontario Regulation 284/09.
Bee Friendly Yards
Council declared May and June 2021 Honeybee Appreciation Months in Sioux Lookout and directed staff to allow residents to exceed the maximum height permitted as per By-law No.16-06 for grass and/or weeds during the months of May and June, 2021.
Composting
Council approved the Environment Committee’s request to distribute a survey to the general public regarding composting in the Municipality.
Request for Letter of Concurrence – Bell
Council authorized and directed the Chief Administrative Officer to provide a letter of concurrence on behalf of Council, as requested by Bell, for the replacement of a 97.6m guyed wireless telecommunication tower with a 98.05m guyed wireless telecommunication tower to be located adjacent to Highway 642 on Crown Land.

Council ratified the direction provided to staff in Closed Session respecting signage negotiations and staffing matters, specifically Option #3, as outlined in Closed Session Report No. 2021-35.
Council approved amending Schedule “A” of By-law No. 92-18, Being a By-law to Make Appointments to Various Boards, Commissions and Committees removing:
Council authorized and directed staff to prepare necessary By-law to execute a land sale and conveyance of land for property legally described as PCL 12009 SEC DKF; LT 606 PL M239, known locally as 12 Sixth Avenue in Hudson, to Peter Ridgway for execution at a subsequent Council Meeting. 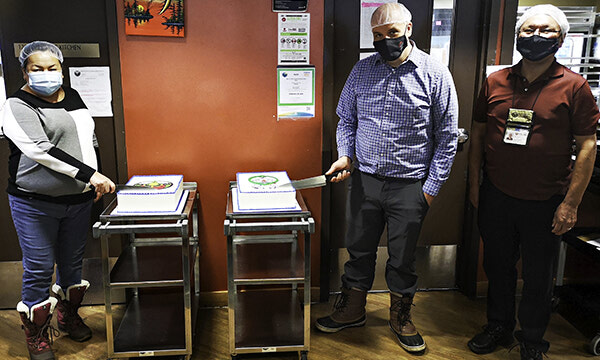 Sioux Lookout First Nations Health Authority (SLFNHA) recently celebrated the 10th anniversary of the Jeremiah McKay Kabayshewekamik (JMK I) hostel.
We are excited to celebrate 10 years since we opened the doors of our new hostel, said James Morris...