Rotary Club of Sioux Lookout representative Dick MacKenzie shared with members of Council the Rotary Club’s vision for the future of the park, adding a report was in progress on how the Rotary Club came to be involved with the park.
MacKenzie highlighted a viewing platform to view sunsets, a sheltered pavilion similar to the one at Cedar Bay, the addition of benches and picnic tables, and signage describing the park as Rotary Park as components of the Rotary Club’s vision for the park.
Municipal Clerk Brian MacKinnon informed, “Staff was asked develop a Report to Council on this topic, with recommendations on how to proceed, based on the request from the Delegation, including: establishing a Committee/Working Group with representation from the Municipality and the Sioux Lookout Rotary Club to discuss specifics regarding enhancements to Drew P. Jeffries Park/Rotary Park; and to develop and enter into a Memorandum of Understanding between the Municipality and the Rotary Club to clarify roles and responsibilities of each party with respect to the Park.”

Council approved the continuation of maintenance to the boat launches and transitions towards the boat launches being completely user-pay service; and further Council directed staff, respecting the Municipal Access Points (Boat Launches) as follows:
prepare a five-year financial and maintenance plan;
consider different, more effective, methodology for collecting data regarding boat launch usage;
increase Boat Launch fees as follows:
Daily – from $5.00 to $7.00
Weekly – from $20.00 to $25.00
Seasonally – from $40.00 to $50.00;
bring forward a Report and accompanying by-law to amend the fee schedule to the Boat Launch By-law and to approve increases to fines.

Council approved submitting an application to fund upgrades at Sioux Lookout’s wastewater treatment plant under the 2019 intake of the Investing in Canada Infrastructure Program –Green Stream.
Andrew Jewell, Public Works Manager explained in his report to council, “With the current influent volume measurements, the WWTP (wastewater treatment plant ) is operating at or near maximum capacity and the potential for growth within the Municipality could be halted/hindered by insufficient wastewater treatment capacity. Therefore, it is recommended to submit an application for the available ICIP Green Stream funding presenting the expansion of the WWTP with the construction of a third combined treatment unit (CTU) as a component of a potential project. It should be noted that when the WWTP was constructed in the early 1990’s the facility was constructed as such to accommodate expansion with the addition of a third CTU. In addition to the construction of a third CTU, the replacement of the outfall sewer piping, or effluent discharge piping, would also be required. The current Environmental Compliance Approval (ECA) for the WWTP, which was granted with the facilities construction in 1992, states that the 130 m of existing 300 mm diameter outfall sewer to Pelican Lake was to be replaced with 450 mm diameter piping; the replacement of the outfall sewer piping was never completed and the existing 300 mm diameter outfall piping is still in service today. With the construction of a third CTU, the outfall piping will also need to be upgraded.”

Council received, as information, the Quarterly Financial Report – Third Quarter 2019 – as attached to the Treasurer’s Report No. RP-2019-18 dated December 18, 2019.
The full report can be viewed at https://bit.ly/2MXcmbF

Council directed staff to submit the following Resolutions for further consideration to the 2020 Kenora District Municipal Association (KDMA) Annual Meeting:
To Review and Increase ACAP Funding for Regional Airports in Canada June 2019.
Legal Aid Cuts- June 19, 2019.
Support to KDSB re: Need to Develop Housing Programs and Services in the District of Kenora to Address the High Rates of Homelessness, Poverty, Addictions and Mental Health Crisis by Providing Safe Spaces July 17, 2019.

Council awarded the contract for the Oil/Water Separator Project at the Airport Maintenance Garage to 1876118 Ontario Limited o/a Makkinga Contractors, in the amount of $110,850.00 plus HST; and further Council authorized the passing of By-Law No.103-19, Being a By-law to Authorize and Direct the Mayor and the Clerk to Execute a Contract between The Corporation of the Municipality of Sioux Lookout and 1876118 Ontario Limited o/a as Makkinga Contractors for the Provision and Installation of an Oil/Water Separator at the Sioux Lookout Municipal Airport, in an amount of $110,850.00 plus HST.

Council authorized the passing of By-law No. 105-19, Being a By-law to Authorize The Corporation of the Municipality of Sioux Lookout to Authorize to Execute Loan Agreements with the Toronto Dominion Bank (TD Bank) for the Landfill, Recreation Infrastructure Canada (RInC) and the Airport Water & Sewer Extension Projects.

Council authorized the passing of By-law No. 104-19, Being a By-law to Authorize and Direct the Mayor and the Clerk to Execute an Agreement Between The Corporation of the Municipality of Sioux Lookout and the Lake of the Woods District Hospital Central Ambulance Communications Centre ("CACC"), for the Provision of Call Taking and Alerting Services for the Sioux Lookout Fire Service. 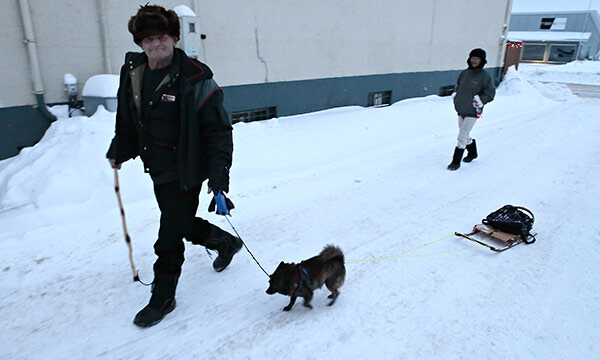 Out for a stroll

Sioux Lookout residents Dean (left) and Marg Barden dropped by The Bulletin office on Jan. 3, while out for a stroll with Wolfy, their Pomeranian Chihuahua.