This meeting took place by videoconference.

Newly appointed Municipal Treasurer Carly Collins presented Council with a 2020 budget forecast using two scenario assumptions – if municipal facilities opened after Canada Day, and two – if municipal facilities were to open on January 1.
“We took into consideration the ban of travel… we took into consideration layoffs that are currently starting this week (approx. reduction: 28 per cent Airport, 36 per cent Town according to Collins’ report). We took into consideration the cuts that each manager is roughly thinking about doing to their department right now in regards to not ordering supplies that they need, putting off certain projects that could possibly be deferred to the summertime or possibly next year and I came up with a possible forecast as to how all this is going to affect our 2020 budget,” she informed.
Collins’ report projects a deficit of $716,722.34 if municipal facilities opened after Canada Day.
It projects a deficit of $1,059,047.23 if municipal facilities were to open on January 1.
Collins stressed at this point, these are just assumptions.
The Municipality of Sioux Lookout clarified, “The projections for both scenarios were based on a two month delay in the economy once reopened.
In her report Collins clarified with regards to Municipal property taxes, “Taxes are billed twice a year, Interim and Final taxes. Interim taxes are billed in January and equal 50% of prior year taxes. These due dates are February 28th and April 30th. Final taxes are billed in June and represent the balance of taxes owing for the current year. Those due dates are August 31st and October 30th.”
“The end of April is going to give us a clearer picture as to what is going on,” she said.
Councillor Cory Lago agreed stating, “I agree with what Carly was just saying. We need to wait until the end of April to see what taxes are coming in and then we can make a projection at that point.”

Update from CAO on Awarding Contract for New Truck for

Review of Suspension of Boards, Commissions and Committee Meetings (Verbal Update by the CAO)

Council directed that its Boards, Commissions and Committees remain on hiatus for the month of May.

Municipal CAO Michelle Larose informed council that staff and the mayor have been using technology to participate in weekly meetings with several groups and organizations.
She said the Northwestern Health Unit has held weekly meetings with local municipalities where they have been advised by the organization’s medical officer of health.
“Sioux Lookout Ad-Hoc COVID-19 Community Response Group has been meeting weekly through conference call. It started out originally as our Emergency Control Group and we’ve added agencies and First Nation representation and tribal councils to these meetings so that we can give weekly updates to each other. As per our meeting yesterday, it looks like everybody is at a stable level with their activities, so we’ve decided to go to bi-weekly meetings unless it warrants having a meeting earlier.
“We’ve also been participating in the Vulnerable Persons Committee, which addresses our Out of the Cold Shelter and people that are homeless or transient in the community.”
Larose continued, “Weekly calls have been organized through our Economic Development Manager Vicki Blanchard with the business community. She has been helping the business community in a lot of ways and finding out what their needs are, how she can help them, and also promoting different areas in which they can access funding, whether it be grant, or loan, or help with their employment issues with their staff. Vicki has also participated in meetings with our First Nations Friendship Accord partners and those meetings have been going very well and a lot of information sharing from those First Nations partners as to their activities and what we can do to help them out as well.
“From an HR and Treasury perspective, our staff have also been participating with their various organizations to help them out with reference to ongoing issues with labour management, unemployment, layoffs, and also finances from the treasury end of it.
“Our airport operations have slowed down somewhat. Our latest report from our manager the other day was that we were down to about the 20 per cent level of operations.”
Larose concluded, “As far as the Municipality is going, we’re still running all departments with but minimal staff and keeping our essential services going.”

Council authorized the passing of By-law No. 46-20, Being a Bylaw to Authorize the Mayor and the Clerk to Execute an Agreement Between The Corporation of the Municipality of Sioux Lookout and Her Majesty the Queen in Right of Canada, as represented by the Minister of Transport for the purchase of a new Electronic Runway Condition Reporting Unit.
Airport Manager Ben Hancharuk explained in his written report to council, “Currently runway condition reporting is done in two stages. A runway condition inspection and a friction test is performed on the runway, the operator then returns to the office and enters this information into a web based platform provided by Nav Canada which generates the NOTAM (Notice to Airmen) that pilots access for this type of information.
“During a runway inspection, other items such as condition of lighting fixtures, navigational aids, wildlife activity, etc. is also observed and results recorded manually in other web based systems or internal documents.”
He continued, “With the use of an electronic runway condition reporting system, this not only eliminates
the need for the operator to return to the office to submit reports, but provides both increased accuracy and efficiency in regulatory reporting requirements by allowing the operator to enter the information and submit the reports while on the airfield with minimal to no typing as these systems work on touch and select from a drop down menu and simply touching a spot on the map of the airfield to enter a location. The reports are automatically uploaded to the appropriate receiving entity such as Nav Canada and Transport Canada.”
Transport Canada has contributed 85 per cent of the unit’s cost, with the Sioux Lookout Airport being responsible for $5093.45, which has been included in the airport`s 2020 capital budget funded through Airport Improvement Fees (AIF). The total project cost estimate excluding HST is $33,960.45

Council authorized the passing of By-law No. 43-20, Being a Bylaw to Authorize and Direct the Mayor and the Clerk to Execute an Agreement Between The Corporation of the Municipality of Sioux Lookout and LBCG for the Development of a Community Safety and Well-Being Plan for The Corporation of the Municipality of Sioux Lookout.
Councillor Joyce Timpson said it made sense to move ahead with development of the plan.
She added, “I think it would be very useful if they included in their safety plan the measures that the Municipality and associated agencies have taken during this pandemic. I think that would be a very valuable thing for them to be able to look at.”
Council discussed how it might be possible amid the COVID-19 pandemic to have public input into the plan.
Municipal Clerk Brian MacKinnon shared, “The Municipality will work with the consultant to determine the best method of public engagement, in light of COVID-19 and physical distancing requirements. This could include various electronic methods of engagement and/or deferring the public engagement portion of the project until such time as the public health directives are relaxed. The Provincial Government, which is requiring that these Plans be developed and implemented, has extended the deadline to have the Plans completed. The original deadline was January 1, 2021, but the Province has now extended that date indefinitely, so this will provide considerable flexibility to ensure public engagement is undertaken in the manner and to the extent required to ensure meaningful input.”

Council authorized the use of $144,000 from the Land Development Reserve Fund, specifically to be allocated for the Pre-Development work at the Bigwood Lake property. 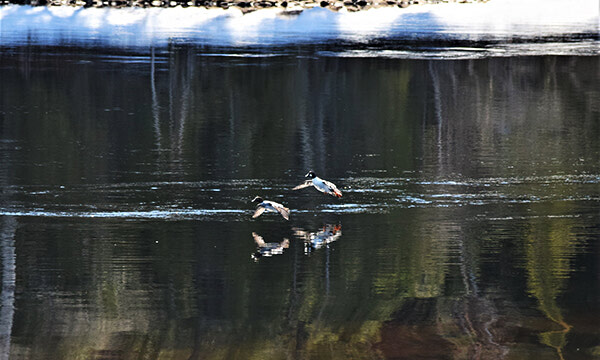 Ducks were seen enjoying the open water at the Frogs Rapid Bridge during a clear, sunny afternoon last Saturday.