A news update issued by the Municipality of Sioux Lookout last week that stated municipal childcare services would end on March 31 has sent a shockwave through the community, and left many people wondering about the future of childcare in Sioux Lookout.

Last September, the Municipality shared that it had entered into an agreement with the Kenora District Services Board (KDSB), “wherein the KDSB will assume responsibility for the two Municipally-run Child Care centres, namely, Biidaaban and Sioux Mountain, effective January 1, 2022.”

The Municipality shared at the time, in a Sept. 17, 2021, Municipal news update, “The Transfer Agreement will see the Municipality’s childcare staff become employees of the KDSB, pending cooperation and concurrence with the Union which represents the childcare workers.”

“We worked very hard to ensure the best possible arrangement for our staff,” Municipal CAO Michelle Larose stated in the Sept. 17 news update, noting, “we did not want to take the ‘wash our hands of child care services’ approach and just layoff those staff members with no measures in place to fill the void that would be created if the Municipality simply decided not to offer the service any more; this arrangement ensures the best possible protection and support for our valued employees, while simultaneously ensuring no disruption to the services.”

That news update stated that, “The Municipality has been in talks with the Union representing the childcare employees and is hopeful for a smooth transition.”

Kristin Wray, Vice-President of CUPE Local 2141, which represents childcare workers employed at the municipally-run childcare centres, stated in a Nov. 4 CUPE media release, “Losing CUPE status would set childcare back decades in Sioux Lookout. We’d be back at square one at the bargaining table to maintain our collective agreement rights that ensure respectable jobs and quality childcare in our community.”

In a Nov. 8 media release, the Municipality shared that it, “recently become aware of an application to the Ontario Labour Board with respect to which Union will represent the childcare workers following the transfer. As a result of this application and associated issues, the Municipality will be required to continue operating the childcare centres into the first quarter of 2022, after which it is anticipated that the KDSB will operate childcare services.”

On Feb. 3, in a news update on its website, the Municipality of Sioux Lookout shared, “As originally announced on September 17, 2021, the Municipality had entered into a “Transfer Agreement” with the Kenora District Services Board (KDSB), wherein the KDSB would assume responsibility for the two Municipally run Childcare centres on January 1, 2022.  As part of the transfer, the KDSB and its union (IBEW) had agreed to take on all staff and ensure the years of service of the staff was not lost.  In a subsequent update to the public on November 8, 2021, the Municipality advised that it had become aware of an application filed by CUPE to the Ontario Labour Board with respect to which union will represent the childcare workers following the transfer. As a result of this application and associated issues, the Municipality advised that it would continue operating the childcare centres into the first quarter of 2022, after which it was anticipated that the KDSB would assume operation of childcare services.”

The Feb. 3 news update went on to state, “In a letter dated January 20, 2022, the KDSB notified the Municipality of its intention to withdraw from the Transfer Agreement due to the inability to find a resolution to the issue of which union would represent the childcare workers.

“At this time, the Municipality will cease to offer childcare services and will be closing the Biidaaban and Sioux Mountain Children’s Centres at the end of the day on Thursday, March 31, 2022, “the Municipal news update informed.

“We remain hopeful that there will be minimal disruption in the provision of childcare services, and that the KDSB will have alternative arrangements in place to fill the gap, advised Michelle Larose, CAO. “Nevertheless, parents should prepare in the event that there is a disruption to the services,” Larose added.

Mayor Doug Lawrance added in the news update, “It is unfortunate that the issue of which union will represent the Sioux Lookout childcare workers is hindering the smooth transition of childcare services from the Municipality to the KDSB. The Municipality worked very hard with the KDSB to ensure the transfer agreement would provide support and protections to the Municipal childcare workers with respect to job security, seniority, and accrued vacation and sick banks.” Lawrance added, “Our primary goal, from day one of the transfer talks, was to have this resolved to best provide continuous service to local families and children. Our concern wasn’t just for the workers affected, but local families and employers who will be impacted by any potential service disruptions.”

Larose concluded by stating, “Any questions regarding the availability of childcare services after March 31st should be directed to the KDSB.”

The two municipally run daycares in Sioux Lookout currently provide service to 35 families with 36 children enrolled in the daycares.

Larose informed that, “In total, 23 staff members are impacted by the pending closures – including childcare, administrative, and support staff.”

The Municipality advised that there is currently a wait list of 150 children for daycare services.

In a phone interview last week, Mayor Doug Lawrance explained, “Council directed staff to undertake the disinvestment of Sioux Lookout in daycare delivery. That was over a year ago. Staff worked hard, and it was a transfer agreement with KDSB, that protected the workers and families and the daycare services.”

Lawrance said the KDSB will eventually be offering daycare services in Sioux Lookout, “It’s just not going to be the smooth transition we had hoped.” He added, “It was disappointing that the transfer agreement had to voided because of the union representation issue.”

“Council’s decision to get out of daycare services is based on how we think daycare services can be best provided to the families and people of the community of Sioux Lookout in an efficient manner,” Lawrance said. “Council’s concerns are with the overall best interests of the municipality, and we believe that’s what we are serving. We of course, believe in daycare and we look forward to when KDSB starts operating it.”

Lawrance further stated, “There may be some disruption and that’s unfortunate and I hope it’s limited. I feel for the families. Sioux Lookout is the last of the Kenora district municipalities to do this. Over the last two years, you will note that Dryden, Ear Falls, and Red Lake all undertook exactly the same transfer. Those municipalities got out of daycare and have switched over to KDSB instead.”

Some comments on social media expressed concern about recruitment and retention of employees to the community following last week’s municipal announcement.

Lawrance commented, “That’s just not the case and that’s not council’s intent. It wasn’t the intent of the other municipalities in our district who we are following along with.”

Wray, CUPE Local 2141 Vice-President and resource consultant for municipal childcare centres is also one of the impacted staff.

Childcare staff, she said, received their termination letters on Feb. 3.

“The childcare workers and CUPE only found out that the transfer fell through from the press release,” she stated.

“CUPE’s mandate is to protect the workers, the workers’ rights and in turn, ensure that high quality, affordable, accessible childcare is protected. We’ve made it very clear, the workers, that all we wanted was to preserve our CUPE bargaining rights. Childcare workers in Sioux Lookout, we deserved to keep our CUPE collective agreement, and it recognizes the importance of our contributions to the community, especially now, during the pandemic,” she said.

Wray said the transfer agreement, “was negotiated between the Municipality of Sioux Lookout and KDSB with zero consultation with CUPE or the workers.”

“To our knowledge, IBEW (International Brotherhood of Electrical Workers) does not know about us,” she added.

She said of KDSB choosing to withdraw from the transfer agreement, “That is KDSB deciding they don’t want to work with CUPE.”

“It’s heartbreaking to us as the workers,” she said, adding, “We are actively pursuing our next steps.”

Wray commented, “I would just like to recognize the families in the community for their tremendous support for our workers during this time. It means the absolute world to us.”

She added, “It is devasting to us what this could do to the families and the children that we love.”

The Bulletin reached out to the KDSB for comment and received the following reply from KDSB Communications Specialist, Carlee Hakenson, on behalf of the KDSB, who shared that in light of the Municipality of Sioux Lookout’s announcement, “the Early Years team at the KDSB is working with community partners and the Ministry of Education and will be issuing a release and plan within the coming weeks.” 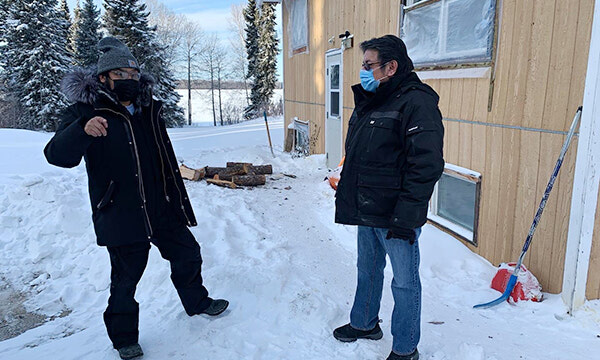 When the outbreak was just happening, it was, I guess, like a tsunami. A tidal wave, each case multiplying on a daily basis.
That s how Bearskin Lake First Nation Chief Lefty Kamenawatamin describes the COVID-19 outbreak that washed over his community..