When the Municipal Truth and Reconciliation Committee was looking for ways to expand community events to cover the week before and after Sept 30, a movie night seemed like a great fit. Prior to the pandemic the Sioux Lookout Public Library had been having regular movie nights but COVID restrictions forced an end to those events for the time being. The next option, and the venue eventually agreed upon, was St Andrew’s United Church. After a discussion about how to best manage all screening protocols and some consideration of licensing issues, it was decided to move ahead with three films by Indigenous creators. The three films screened were “Muffins for Granny” by Nadia McLaren (a former Sioux Lookout resident), “The Gift” by Rachel Garrick of Hudson, and “Jane & the Wolf” by Nadine Arpin of Sioux Lookout. As Aileen Urquhart relates, “I think some of the reasons behind the choice of films are that the film-makers are all Indigenous women with ties to Sioux Lookout.” Urquhart continued, “We had 10 people at the film night. Although the turnout was small, I think people were impressed with the films. Nadine and Rachel offered some introduction for their films and we had some sharing after. We served muffins as a take-out!”

As Sioux Lookout filmmaker Nadine Arpin relates, “Making Jane & the Wolf was a life changing experience for me as filmmaker and director back in 2016. I feel the three titles worked well together, all stories reflecting similar reflections on truth, resilience, and healing. It was a small but mighty audience of enthusiastic and supportive community members. In regards to future events (it) would be wonderful. Where there is a will and financial support there is always a way. It is my hope that people recognize the importance and value of the arts to help process, express and understand trauma.”  Hudson filmmaker Rachel Garrick had this to say about the evening, “I was so happy to premiere my film, The Gift, here in Sioux Lookout as part of the Truth and Reconciliation events.  My mother, Minnie, was a Residential School survivor and I am pleased that there are opportunities such as this to share some of their stories, experiences and memories.  I’d like to thank Aileen Urquhart and the St. Andrew’s United Church for organizing this event and inviting me to participate. “Garrick also shared some exciting news, stating, “I’m excited to share that The Gift is scheduled to screen Sunday, Oct 24, 2021, in the Short Films Program: CENTRE during the imagineNATIVE Film Festival (happening) October 19 - 24, 2021.” 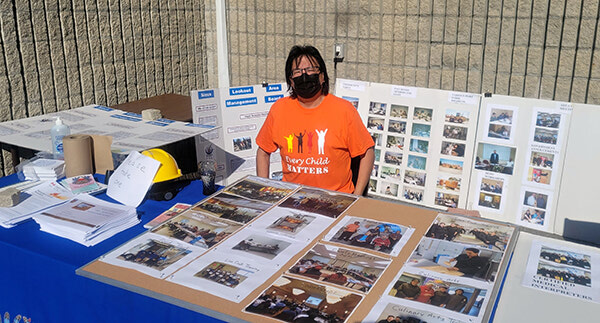 The Sioux Lookout Area Aboriginal Management Board (SLAAMB) welcomed the public to an Open House and Barbeque on Tuesday, September 28 in recognition of The National Day for Truth and Reconciliation (held on Sept. 30)...