Morgan Fuels is supporting the Nordic Nomads Cross Country Ski Club with a donation, which the club will put towards the purchase and construction of a shelter to store their trail grooming and maintenance equipment at Cedar Bay.

He continued, “We identified throughout our entire footprint, from the Kenora area, Red Lake, Dryden, Pickle Lake, and in Sioux Lookout we identified that the Nordic Nomads and the fat bike club (Cedar Bay Trail Co) are groups that have done a lot of work and have a number of projects that will benefit local residents and visitors to the area for the long-term…Across the region we’re supporting a playground that the town of Pickle Lake is developing. We’re working on a trial network in Dryden. We’ve supported some signage in the Red Lake area for their ski club as well and the Kenora ski club. Outdoor recreation being key during COVID, its healthy living, it’s important and it’s low cost. There’s very few barriers to participation, which is important to us.”

Nordic Nomads Cross Country Ski Club President Ron Laverty thanked Morgan Fuels for their donation, stating, “This winter they came and had a conversation with me and said we’re looking to donate money to recreational activities in Sioux Lookout. They spoke with us, they spoke with the fat bike club…We’re going to be helping the fat bike club at the same time. We’re going to be using the money, a $4000 donation, towards our shelter that we’re building for our equipment…We’re going to have a c-can, then we’re going to have a cantilevered shelter that goes over top of that so that we can put our groomer underneath it, and other equipment. And at the same time, the fat bike people will be using it too.”

Laverty said he hopes the shelter can be in place this fall.

The club also held its 50/50 Draw on May 21 at the Sioux Lookout Golf and Curling Club.

Funds raised through the 50/50 draw will also go towards the shelter’s purchase and construction.

“It’s definitely going to help to have things on site there and usable so that it’s ready to go and that more people can do some of the grooming activities,” she said, adding the club wished to extend an extra big thanks to club member Kirk Davis for his efforts in making the draw successful.

Anyone wanting to donate towards the new shelter can contact Laverty at 807-737-8998 or email him at [email protected]. 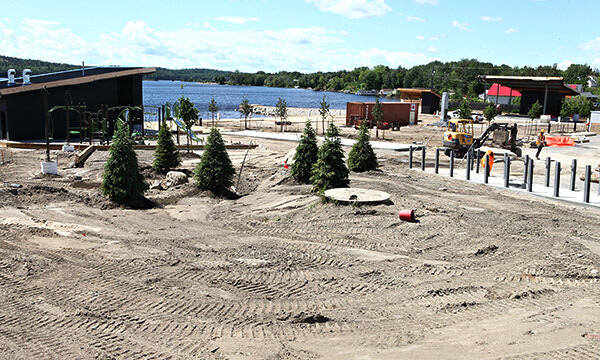 Waterfront Development Project likely to be completed in early July, but could finish sooner

The Municipality of Sioux Lookout s Waterfront Development Project at Farlinger Park (the town beach) may be complete as early as June 21, but will more than likely be completed in early July...