Aiming to offer the community of Sioux Lookout some opportunity to enjoy themselves on the water after the prolonged COVID-19 restrictions, Moosehorn Lodge conducted a Boat-In Movie Night last week, free of charge, with another one scheduled for September 3.

Owner/Operator of Moosehorn Lodge, Nicole Archer shared, “We talked about many different ways that we could do something for the community and offer something that could be done on the water. We knew that people were feeling so couped up after a winter of being under heavy restrictions and stay at home orders that we wanted to give people something to do.” She added that this is when they came up with an idea of the Boat-In Movie Night.

Archer hosted a poll through social media, asking the community to choose one of three movies suggested. “On August 20th we played the movie National Lampoon’s Vacation. We had five boats in the bay plus 15 people on the dock watching. The guests that were staying at the cabins were also able to see from their cabins,” shared Archer.

The movie was projected on a large inflatable screen, with the projector and speakers set up on the beach. Boaters could pull into the bay and anchor close to the shore, shared Archer. There were also some chairs set up on the dock for those who do not own a boat or who wished to be on the dock.

Archer shared, “We were very happy with the event. The weather was not cooperating as we had hoped and had called for rain showers during the evening. Then the heavy smoke set it. The visibility on the water was very poor and I think because of that there were not as many people as we had expected. There was also quite a breeze so it made the inflatable screen dance around a little bit but it sure helped to keep the mosquitos at bay. The popcorn donated by Fresh Market Foods was a big hit too.”

Depending on weather conditions at the time, and in order to enable more people to enjoy the event, Archer shared that they decided to conduct another Boat-In Movie Night this season. “Back to school influenced, we will be playing Ferris Bueller’s Day Off on September 3rd starting at dusk,” she added. Since the movie, Jaws, also received a high number of votes on the poll held online, Archer shared that they would try to play that movie next season.

This free-of-charge event will run on a first come, first serve basis with no requirement to register. “Concessions are available at the boat house. We will be setting up chairs on the beach to view the movie from both sides of the screen as well as the dock for those that don’t have boats. For more info you can visit our website https://www.canadafish.com/specials or call the lodge at 737-2630,” shared Archer. She added that they hope to see a greater number of people attend the upcoming event. 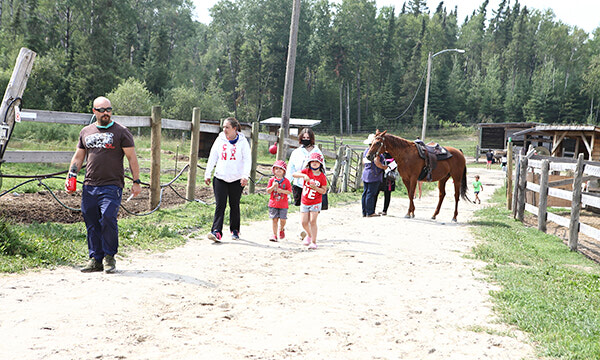 Visitors to the Cedar Bay Stables on August 7 learned about horses as they received directions from riders and solved clues leading them to a lost treasure , which contained toy prizes...