Residents across the region had the opportunity to review and comment on the Ministry of Natural Resources and Forestry’s (MNRF) proposed insect pest management program to control the jack pine budworm infestation in the Red Lake, Kenora, Dryden, and Sioux Lookout districts.
Information centres were held from Jan. 28 to Feb. 4 in Ear Falls, Dryden, Sioux Lookout, and Ignace, which provided material for residents about the current state of the infestation along with treatment options.
“Currently in the northwest region we have just a little over one-million-hectares of defoliated jack pine, which is an increase from last year where we had just a little over 630,000 hectares. It’s not uncommon because it does come in periodic outbreaks. It’s a natural cycle of the insect,” said Dan Rowlinson, Provincial Forest Health Coordinator.
“From a management perspective, the approach is to provide foliage protection to the trees to keep those trees green through that natural cycle. The goal is also to protect wood supply to feed the mills and to reduce fire hazard, so those would be the objectives of a management intervention,” he said.
According to Ontario.ca, “Jack pine budworm is a native insect that periodically reaches outbreak levels (approximately every 8-10 years) in Ontario… The budworm larvae cause widespread defoliation, growth loss, top kill and tree mortality.”
During Sioux Lookout’s information centre on Jan. 30, the MNRF shared there are multiple treatment options for jack pine budworm infestations.
“You can use these options by themselves or you can use them as a suite of options. The first option is no treatment, but we would obviously like to do something to manage this and mitigate more damage. There’s accelerated harvest, so that would be when there’s stands that are becoming badly infested we want to harvest them now rather than later. The other option is salvage harvest. There’s prescribed burning, but we lean more towards the accelerated harvest and the salvage options,” said Dean Hample, Regional Forest Operations Specialist.
“There’s alternative methods such as pheromone traps, but with a million hectares that’s a lot of traps so it’s not really practical. There’s finally the aerial application of btk (bacillus thuringiensis subspecies kurstaki), so we would do an aerial treatment using btk. It’s water-soluble, it’s safe, and it’s been used in Ontario since the early 80’s, so that’s our preferred method because it’s the best way to do a broad-scale application most efficiently and quickly. We’re saying that’s our preferred option, but that’s not precluding the fact that we might use, in a given area, accelerated harvest with an aerial treatment. It can be as part of a suite of options to mitigate more damage,” he explained.
The MNRF said, most recently, the Red Lake, Kenora and Dryden districts received treatment for a jack pine budworm infestation last summer. Approximately 100,000 hectares of forest received treatment.
“The last jack pine budworm insect pest management program was developed and implemented for a similar infestation for the Red Lake, Kenora and Dryden districts in June 2019. During an outbreak, management intervention occurs on a very small portion of the overall outbreak. The intent of an aerial insecticide treatment program is to provide foliage protection during the natural outbreak cycle. In 2019 the program involved aerial application of organic insecticide, in addition to accelerated and re-directed harvest. Annual monitoring of this infestation as well as survey work for overall forest health and other forest insect pests and diseases continues to occur each year in the province to inform MNRF’s responses,” said Michelle Romeo, Regional Outreach Specialist for the MNRF in the Northwest Region.
“Last year we did the Red Lake forest, Whitefeather forest, Trout Lake forest, and a little in the Whiskey Jack forest. We treated 100,000 hectares last year,” said Hample.
The MNRF said the current infestation is affecting the Red Lake, Trout Lake, Whitefeather, Kenora, Whiskey Jake, Dryden, Wabigoon, English River, Lac Seul, and Caribou forests in northwestern Ontario.
Despite the damage it does, the jack pine budworm is not considered an invasive-species.
“It’s present all year round in the tree, but it only does the impact during the growing season. Usually it emerges in late May and it’s visible until mid-August… It causes a lot of damage but it’s not considered an invasive-species. It’s a native pest,” said Rowlinson.
For more information, contact the Sioux Lookout MNRF district office at 807-737-5053. 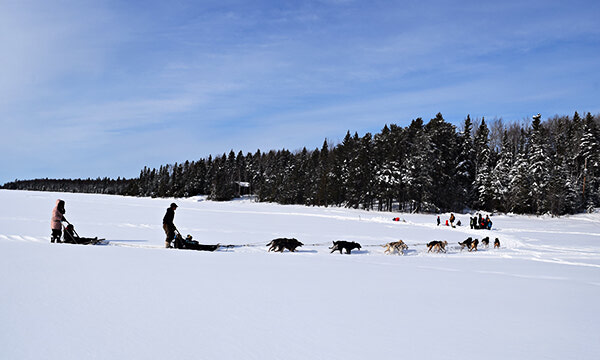 Local musher Jesse Terry is gearing up for a dog sled season that he describes as one of the biggest seasons he s had.
Terry said he has two races approaching that will see him submit two teams in each, allowing him to race and travel with his family.