Sioux Lookout Minor Hockey Association (SLMHA) IP Division skaters, who range in ages from three to six-years-old, had an opportunity of a lifetime when they laced up their skates and hit the ice at the Bell MTS Centre in Winnipeg.
Twelve SLMHA IP Division skaters played a six-on-six game during the first intermission at the Winnipeg Jets game on Dec. 27.
“Our local Tim Hortons owner sponsored it, so Grant (Power) has been applying for a few years because it’s a promotion that the (Winnipeg) Jets and Tim Hortons offer. Sioux Lookout finally got selected, and our local Tim Hortons owner supported us to go. We got tickets for all the kids and a parent and coaches… It was really great. We had lots of fun,” said Michelle Turner, Sioux Lookout Minor Hockey Association Convener for the IP Division.
“I think they were really excited. The parents were excited to, and it all went smoothly. We got to hang out with the mascot afterwards, and they really liked that. They got some good pictures with him,” said Turner.
SLMHA skaters Ethan Turner, Raleigh Clark, Brooks Caul, Colton Gould-Young, Connor Gould-Young, Mason Quedent, Malcolm Laverty-Hansen, Nolan Gaudry, Sailor Atwood, Kalen Wesley, Daxton Mosher, and Nikolas Glenn were joined on the ice by coaches Adam Clark, Chris Young, Mike Laverty, Sean Gaudry, and Karla Madsen.
Following the intermission skate the skaters got to hang out with Winnipeg Jets mascot Mick E. Moose as well as watch the remainder of the game between the Jets and the defending Stanley Cup champion St. Louis Blues.
Some of the skaters said they enjoyed the experience.
“I had butterflies in my stomach. It was fun. We saw the mascot after too,” said Malcolm Laverty, IP Division Skater.
“I got to hug the mascot and take pictures with him. Next time I want to play with the Jets players on the ice,” said Nolan Gaudry, IP Division Skater.
Through a post on their Facebook page on Dec. 28, the SLMHA shared, “Congrats to the Sioux Lookout IP kids who participated in the Winnipeg Jets first intermission skate. Well done coaches and kids!”
The SLMHA expressed their appreciation and thankfulness for the Sioux Lookout Tim Hortons, who helped support the young skaters and made the opportunity possible. 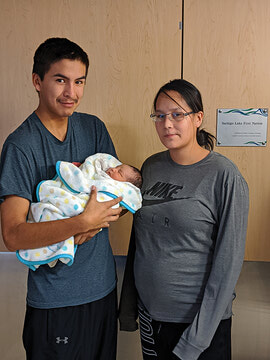 SLMHC delivers its first baby of 2020