Phyllis, born in Nova Scotia, has lived in Sioux Lookout for the past 40 years. Phyllis married Leonard Henrikson in 1991, and was happily married for 23 years, enjoying time at their home on Abram Lake, until his passing.  Phyllis’ joy and passion came from her painting, crocheting, their animals, and numerous hours they spent fishing and boating around the beautiful lakes surrounding Sioux Lookout. She was well known as a volunteer at the Salvation Army (Sally Ann), and brought immense pleasure and comfort to those that were sick at the hospital, with her dog Buddy, through the Therapy Dog Services Program, later being trained as her loyal service dog. Phyllis’ compassion, wisdom, strength, courage, and her straightforward direct approach to life, will be missed. Rest in Peace!

At Phyllis’ request there will be no viewing, funeral or graveside services held. She will be resting beside her late husband Leonard Henrikson at the Northway Cemetery, Sioux Lookout.

Thank you to the doctors and nurses, community health care professionals, and the Sioux Lookout Funeral Home for the care and compassion she has received.

The family is grateful for condolences, flowers, cards and donations.

Do not stand at my grave and weep,

I am not there; I do not sleep.

I am a thousand winds that blow,

I am the diamond glints on snow.

I am the gentle Autumn rain.

When you awaken in the morning’s hush,

I am the swift uplifting rush,

Of quiet birds in circled flight,

I am the soft stars that shine at night.

Do not stand at my grave and cry,

I am not there.

I did not die. 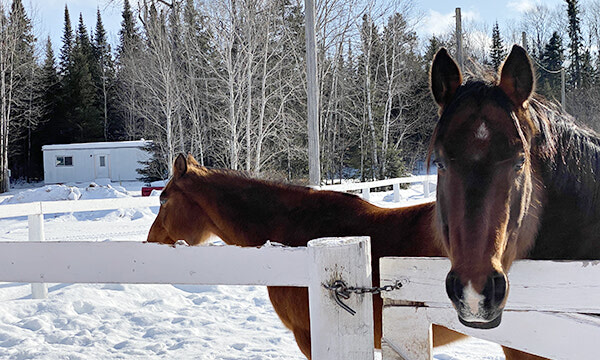 This pair of horses spotted at the Cedar Bay stables riding ring on Feb. 28 were observed curiously watching the goings on as people trekked up and down the trail to the lakefront, cross-country skied, snowshoed and fat biked.