She was predeceased by her beloved husband Patrick and son James in 1994; her mother Agnes (nee Linnen), father George, brothers Peter Linnen and George Dumayne, sisters Esther, Isabel, and Mary.

Mabel was born a tiny baby of 2 pounds on December 21, 1935 in Lachine Quebec. The French language was important to her for in her final hours she would only respond if her children spoke to her in French. Following her mother Agnes’ death, Mabel took over maternal care of her two younger siblings Mary and Tom when she was the tender age of eleven. After high school graduation her first job was working for Stelco Steel. She met Patrick Laverty at an RCAF social and they were married in 1956. Because Patrick was in the Air Force, they raised a family while being transferred through out various military postings in St Hubert and lac Saint Denis Quebec , Goose Bay Labrador, Gander Newfoundland, Ottawa and finally Sioux Lookout in 1970.

Mabel enjoyed gardening, fishing, blueberry picking and really anything outdoors, choir, curling, crafting dough art, dancing, karaoke, bingo and scratch tickets. She showed no mercy in a card game! She inspired her family with her faith, resilience and ability to smile and sing despite all the losses and challenges life sent her way.

Her family wishes to give special thanks and recognition to Dr. Teresa O’Driscoll for her years of caring; to Dr. Laurel Laakso for supporting mom and her family in her final days and to all the staff at the William George Extended Care as they were Mabel’s second family for the past 7 years. It touched us greatly to see the staff come in one or two at a time to tell us a story about mom and to say goodbye to her.  We so appreciate Gail Baumgartner for coming to pray with us in her last hours. It was very special having Margie Kimball play her guitar and sing one of mom’s favourite hymns along with Garth Hyslop, on organ, leading the combined church choir that sang so beautifully at her funeral.  We give thanks for Mabel’s long time friend, Donna Prior, for her words at mom’s visitation; Father Stephen Chilaka for his compassionate and personal final prayers, visitation and funeral service; the professionalism of the Funeral Home staff; the beautiful luncheon prepared by the CWL; all the friends who sent food, flowers and cards; her son-in-law, grandchildren and great grandson who carried her to her final resting place. We will remember you.

A funeral mass was held on Friday February 1, 2019 at the Sacred Heart Roman Catholic Church in Sioux Lookout.  Interment of ashes will be at a later date. If friends so desire, donations may be made to the William George Extended Care Flower Garden through the Sioux Lookout Funeral Home, Box 1449, Sioux Lookout, Ontario. P8T 1B9. 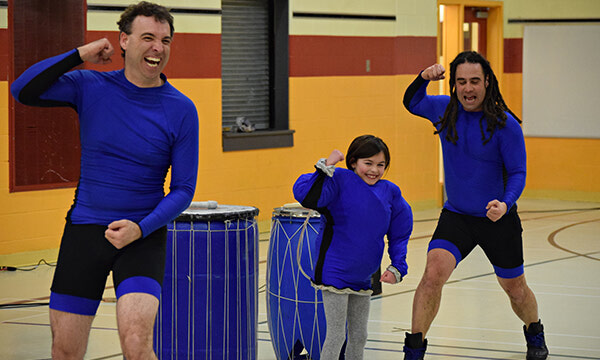 Young audience members had more than their fair share of entertainment, and comedy, during the BAM! Percussion performance, presented by the Kids Kaleidoscope Entertainment Series, on Feb. 21.