Gladys is survived by her sons: William (Colleen), Brian (Sheelah), and Barry (Cindy), her six grandchildren: Billy, Andrew (Courtney), Jordan (Roxanne), and Megan (Jay), Jorel, and Shael, her two beautiful great granddaughters Autumn, and Avery, her brother Gordon, her sisters in law Anne, and Margaret, as well as her many nieces, nephews, and cousins. She was predeceased by her husband William (Bill Carroll) and her parents, Joseph and Anna Bandola, and many other cherished family members.

Gladys’ parents lived at various locations on the CN mainline, between Sioux Lookout, Ontario, and Winnipeg, Manitoba and when her mother became due, Gladys was born in the nearest medical facility, Sioux Lookout General Hospital.

She spent her earliest years with her parents and her younger brother Gordon at different isolated locations on the railway line. When she was old enough to attend elementary school,

Gladys lived with her grandparents in Elma, Manitoba. On some of the really cold days, she would be given a ride to school in her grandparents’ vehicle (horse and sleigh).

Summers were spent with her parents at Farlane (her dad’s posting as a CN maintenance foreman). Gladys had fond memories of Farlane, where she loved to swim, bonded with her brother and parents, and picked blueberries to sell to the tourists.

She developed many close friendships during her high school years in Winnipeg. Occasionally, she would return to Elma by train, to visit her grandparents, but really looked forward to the summers when she could be with her parents and brother.

After graduation and some extra training, Gladys worked for Eatons Department stores doing administrative and secretarial work in Winnipeg, Toronto, and Thunder Bay.

While on an extended visit with her parents at their posting in Brinka, she met her future husband Bill, who fell in love with her at first sight. They talked one day when the train had to stop there, and he would subsequently get dropped off on the way by, and after visiting Gladys, walk several miles back to Redditt, where he would catch his return assignment (train) back to Sioux Lookout.

Gladys and Bill were married in Sioux Lookout in 1953, where she made her home, and together they raised their family. After a childhood of being billeted and living away from home for most of each year, she felt grounded and relished her new home life.

She made many friends in Sioux Lookout. Gladys volunteered with the Catholic Women’s League for years, and enjoyed bowling, bingo, traveling, the casino, and family time. She was blessed with a beautiful voice, and would often sing along to the radio or television, when she recognized a tune.

Gladys had a special quality; it was genuine warmth. It was just so nice to be in her presence.

In her final few months, Gladys resided in Meno Ya Win Health Centre where she endeared herself to the staff, just by being her beautiful self. It was heart warming to see them come in, one or two at a time, to say goodbye, and pay their respects.

While Gladys’ passing leaves a huge void in the lives of those of us who knew her well, the memories of her beauty and kindness will be there in her place.

A Celebration of Life for Gladys will be held at a later date. 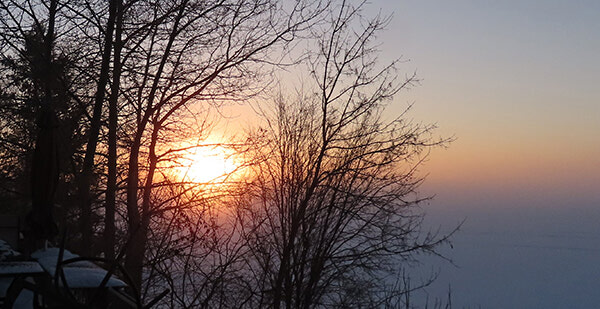 Dick's Hideaway: Who wouldn’t be happy?

Darrell Morgan and I live a mile apart, across a bay of Pelican Lake. When we want to, we can wave across the water to each other.