It is with very heavy hearts, that family announces the sudden loss of beloved husband, father and vectev (grandfather,) Ansis Rudolph Stasus at sunset on Tuesday, November 17, 2020 after a short illness at the Thunder Bay Regional Health Sciences Centre.  He was almost 81 years young.
Ansis, also affectionately known as Stas and Fud was born on December 31, 1939 at Central Patricia (Pickle Lake), Ontario where he resided with Latvian parents, Rudolph and Nellie Stasus until the family moved to the city of Winnipeg, Manitoba.  Ansis spent his childhood at his father’s hobby farm property, known to family as “The Farm”, located on the Winnipeg River just ouside the town of Lac Du Bonnet, Manitoba.  Ansis went on to attend and graduate from the University of North Dakota with a degree in biology.
Unbeknownst to either, Ansis met his future wife, Silvija Ozolins at the young age of eighteen while attending what would be one of many Winnipeg Lativian Society events hosted at The Farm.  A romance ensued over the many years, and the couple later wed on October 8, 1966 in the city of Winnipeg.  The newly weds moved to Fort Frances, Ontario to pursue Ansis’ biology career after being offered a position as a Biologist with the Ministry of Natural Resources.  Fort Frances is where the couple started their family with the birth of their son, Rudolph in 1970.  In 1972, Ansis accepted a transfer within the ministry  which would relocate the family to the small northern town of Sioux Lookout, Ontario.   In 1974, Ansis and Silvija welcomed the arrival of their second child, Aldija.
Ansis, a strong family man played an integral role in the raising of their two children given Silvija’s nursing position often required her to work night shifts.  He was a strong father figure and had loving, nurturing relationships with his children and daughter-in law, Karen and he had a special place in his heart for his only grandchild, Kaelyn. From an early age, Ansis had a keen interest in classic motorcyles, fine cars, and John Deere tractors.  He and his daughter Aldija loved the art of grass cutting which was passed down to Kaelyn.  He could spend hours drinking coffee with his son Rudy, talking shop about motors, tools, tractors and their next elusive project.  And the only person that could get him to reveal his trading secrets was his grandaughter Kaelyn.
Ansis enjoyed the sport of handball, squash and later raquet ball, cycling and simply cutting grass.  He had a taste for good wines, loved a great homemade pizza and baked “goodies”.  Early in his adult life, Ansis was introduced to the stock market world by a colleague and spent many a years learning and pursuing his ticker hobby.  While Ansis enjoyed a successful career as a Biologist, it was his passion for market trading that offered him a pathway to early retirement from the ministry at the age of 48. His retirement years were spent between Sioux Lookout, Lac Du Bonnet, and The Farm enjoying his family, and favorite pastimes.  Ansis and his wife will be long known for the many Latvian Days hosted at The Farm that brought Latvians from across Manitoba to enjoy a day of socializing and Skeet and target shooting.  In his final year, Ansis was the proud and single largest interest-free investor that helped to establish the newest not-for profit Cheer organization in Southern Mantioba, Phoenix Cheer Athletics based out of Ste Anne, Manitoba.
Ansis is preceded by his parents, Rudolph and Nellie Stasus of Winnipeg, Manitoba, and daughter, Aldija Stasus of Winnipeg, Manitoba.  He is survived by his wife of 54 years, Silvija Stasus of Sioux Lookout, son Rudolph Stasus (Karen) and veckid (granddaughter) Kaelyn Stasus of Kenora, Ontario.
Our family loss runs deep but we are comforted in knowing that Ansis (Stas/Fud) has certainly found his way back to The Farm where he will spend his eternity watching the river float and roll, and smoking cigars as the sun sets on the other side of the river.  Ansis will be sadly missed, but without doubt he’ll be watching over all of us, his John Deere tractors and watching the grass grow with every new summer.  May peace always be with him. Chalaka, as he often would say with each farewell.
We would like thank the medical staff at Sioux Lookout Meno-Ya-win Health Centre and Thunder Bay Regional Health Sciences Centre for their remarkable lifesaving medical efforts and personal care extended to our family.  And many thanks to family and friends who continue to offer prayers and support.
In keeping with Ansis’ wishes, an intimate celebration of life will be planned at The Farm for immediate family when the green grass returns. 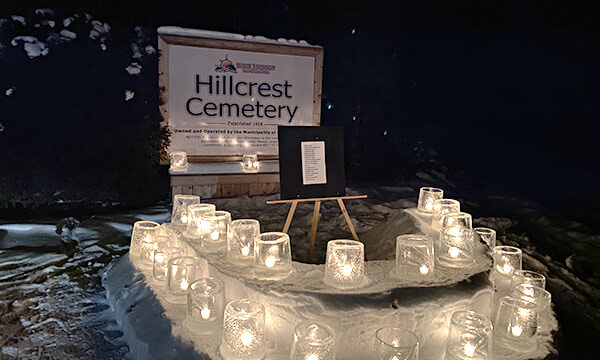 Lights in the darkness

The Rotary Club of Sioux Lookout continued its tradition, established in 2002, of preparing and selling Ice Candles this year.
The Ice Candles, which were purchased in memory of loved ones no longer with us, were placed atop snow terraces at Sacred...