It is with deep sorrow that the family of Lydia (Pizio) Carlbom announces her passing on Sunday, July 18, 2021 at the William A. George Extended Care Unit in Sioux Lookout, Ontario, at the age of 94.
Lydia is survived by her brother Rudy, her five daughters Corrine (Lloyd, Beverly, Keith, Gaylynne, Jennifer), Marion (Earl, Clifford, Andrea, Scott), Margaret (Eric, Della, Chester, Karl), Jackie (Dave, Syrena), and Emmy (Warren, Matthew), as well as numerous great grandchildren and great-great grandchildren.  She was predeceased by her husband Chester (Chet), parents Michael and Serafima Pizio, and sisters Sophie and Rayisa Pizio.
Lydia was born in Podkamien, Poland on January 14, 1927.  As an infant, she and her mother travelled across the ocean aboard the Andania from Poland, arriving at Quebec City on September 10, 1927.  Shortly thereafter, they boarded a train to Sioux Lookout to join her father and begin their new life in Canada.
Life in the early years was not easy for Lydia and her family.   Tuberculosis struck the family and landed Lydia, her mother and her siblings in the Thunder Bay Sanatorium for an extended period of time.    This was followed by a stay at the orphanage under the strict ruling of the nuns until their mother was well enough to return home to look after them.  Once Lydia began elementary school, she learned to speak English.  This gave her the ability to translate, and often advocate, on behalf of her family from that point on.
Lydia always loved school, and valued her education with high regard.  She always strove to have top marks and took pride in her accomplishments.  Once she completed high school, Lydia travelled by train to Toronto, where she completed the one year Teacher’s Training program.  She returned home where she began her teaching career at a one-room school house.
After World War II, Lydia met a charming soldier, Chester Carlbom. It was shortly thereafter their meeting that they quickly fell in love and began building their family together.
Everyone who knew Lydia, knew that she was a take-charge kind of woman.  Lydia ran a tight ship, where orderly routines and structure were the norm, both at home and in her classroom.  It was because of this, that Lydia was able to balance the challenging task of raising five girls while teaching full time.  As if this wasn’t enough, Lydia was determined to complete her baccalaureate degree at the same time.  Through countless courses via night school and summer school, at the age for 47, Lydia graduated with honors from Lakehead University, earning her Bachelor of Arts degree with a double major in English and History.
Lydia loved being a teacher, impacting hundreds of children over her 36 years of service.  She shared her joy of reading, her enthusiasm for history, and her passion for travel with all of her students.  In celebration of her retirement in June of 1984, Lydia and Chet went on a three month excursion through Europe.  During this time, they both discovered their family heritage in Poland, Russia and Sweden.  They were able to continue their love of travel over the following years, visiting a variety of locations in Europe, United States and Canada.
Lydia was passionate about the Arts.  She loved the theatre and music, and had a vast collection of artists who she listened to.  Lydia held season tickets to the opera for many years, and travelled frequently to the city to see every Broadway musical that was being performed.
Lydia was a devoted community member serving on several organizations.  She was a Charter member of the Sioux Lookout Lioness and the secretary for the Sioux Area Senior’s Activity Centre.  Lydia was an active supporter of the Sioux Lookout Public Library, and enjoyed working on the development of the Tracks beside the Water publication.
Lydia was an incredible cook.  She took pride in preparing her food from scratch.  Sunday dinners were especially special, and always included a homemade pie with pastry that would melt in your mouth.   The jam tarts that were made from the leftover pastry always disappeared as quickly as they were made.
Lydia’s family wish to thank Doctors Laakso and Fry, Andrea McWatters, and the staff at Extended Care for their wonderful care and concern.  Your kindness and consideration were greatly appreciated.
A small private funeral was held for Lydia’s family and close friends on Friday, July 23, 2021 at the Sacred Heart Church.  If friends so desire, donations can be made to the Sioux Lookout Public Library, the William A. George Extended Care Unit, or an organization of your choice. 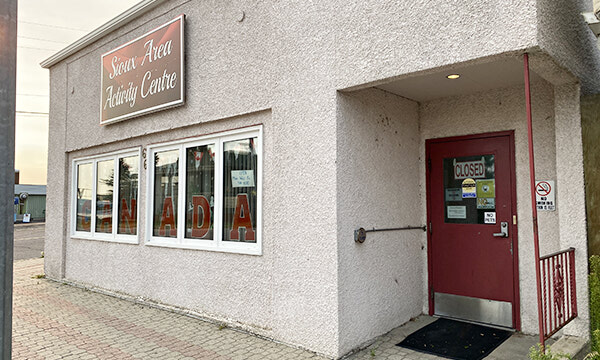 The Sioux Area Seniors Activity Centre reopened its doors on July 19 to welcome back members on a limited basis....