It is with great sadness we announce the passing of Gord. Left to mourn is his wife of 56 years Mary; children Ken, Dan (Sarah), and Dean (Cassandra);  grandchildren Jamie, Kira, and Tessa; sisters Bev Bruce and Lorraine Scott (Dave); brother-in-law Brian O’Connell, sister-in-law Helen Mehaffey, many nieces and nephews, and friends (Danny, Dave).

He was predeceased by his parents Cliff and Mayme; father and mother-in-law Frank and Lena Mehaffey; brothers-in-law Stan Bruce and Robert Mehaffey, and sister-in-law Francis O’Connell.

Gord retired from the C.N.R. after 33 years of service and was a long-time member of the Royal Canadian Legion. He enjoyed fishing, hunting, trapping minnows and just being an outdoorsman with a true regard to the wilderness. He enjoyed spoiling his grandchildren along with many other things.

There will be a private service at a later date.

In lieu of flowers, donations may be made to the charity of your choice.

Family and friends can leave condolences, comments and stories at  www.seasonsfunerals.ca. 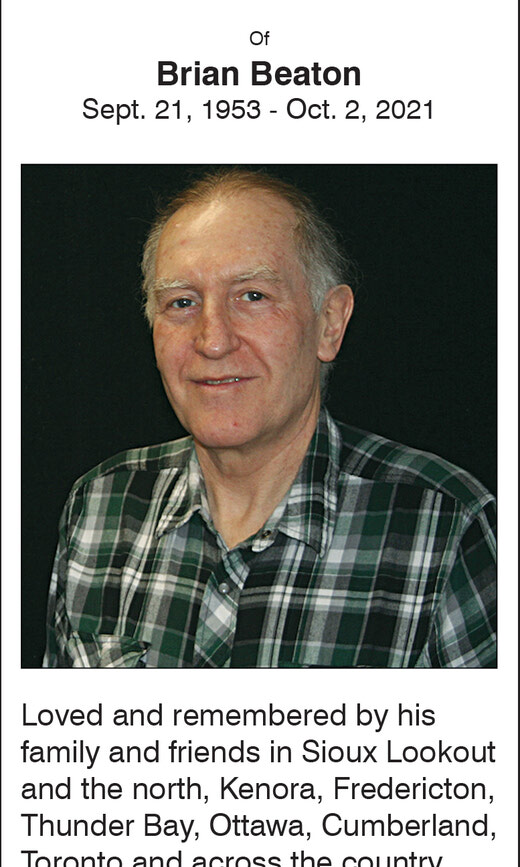 In Lovng Memory of Brian Beaton