The world has been fortunate to have had him for 96 years.  A life well lived, he has gone to be with his beautiful Gina.

Elio was born in Sioux Lookout on Sept 13, 1925 to Antonio and Teresa Facca.  He grew up on Soup Bone Alley (York Street) along with so many Italian immigrant families.  Elio was predeceased  by an infant brother and his sister Mary (Frank) as well as all Gina’s siblings and their spouses - Mario, Chipo, Gino, Fritz, Etchie and Mary.

Elio was renowned for playing the accordian at the Pavillion and Ukranian Hall dances.  At 16 years old he would take the train to Winnipeg for lessons at St Mary’s Academy, bringing his accordian that his dad had brought over from Rome.  Not surprisingly his home had many loud gatherings with our Zias, Zios and cousins.  Well into his 90’s he could still play his favourites happily entertaining great grandson Rhett.  When he was in grade 10 his father found out he was skipping school to hang out at the pool hall.  He was told he better get back to school or get a job so Elio started working at Pete’s Grocery.  With the onset of WWII Elio enlisted in the army and worked as a car mechanic spending his time at Camp Shilo and in Hamilton. He became fast friends with Etchie, Gina’s brother, and it was through him he became penpals with her.  Elio made several trips to Trail, BC to visit her, she accepted his proposal and before Gina knew it she was moving to Sioux.

Elio had worked as a mechanic for Isabey’s Garage after the war.  In 1947 he was hired on and eventually became an Engineer for the CNR going to Armstrong and later the Bruce Lake run until his retirement in 1981.  In the 60’s Elio bought a Scout International and would plow snow when he wasn’t at work.  He would help out Pelican Lake Ice Company clearing the lake for ice cutting for the trains.  It was around this time Elio bought his camp at Hannah Lake - his heaven on Earth.  His retirement days were spent there tinkering and welcoming everyone who would come down for a repair job, a spare part or a “quick one”.  Elio never sat idle - he could and would fix anything.  He was dedicated to the Knights of Columbus as well as helping out any friend in need of some hard work.  Elio and his father built the family home along with help from the work party of his many friends.  Proudly they were able to live there until their early 90’s.  Their house was always welcoming with mom’s cooking and dad’s homemade wine.  Every Fall the cases of grapes would be unloaded and the smell of fermenting Zinfandel would fill the house.  Soon the oak barrels would be full of EJ’s self proclaimed best wine in town.

Dad and Mom were married for 70 years.  They were dedicated, loving parents and grandparents - always supportive and helping us out in anyway they  could.  They instilled in us that family was everything and in the end nothing else really mattered.  Their love, pride in us all and hard work ethic are their legacy.

As a family we thank Dr. Jon Morgan for providing years of care.  The Funeral Home for their respectful service.  Our family and friends for their kindness and sympathy.  And especially the staff at Extended Care who endured Elio’s wit and dry humour.  He was always a watchful eye, keeping the staff on their toes especially on evenings and nights.  We are thankful Dad and Mom were able to be so well cared for there.

Rest easy Nonno.  You and Nonna forever together in peaceful sleep.

A celebration of Elio’s life will be held at a later date.  If friends so desire donations may be made to the Alzheimer Society Music Project through the Sioux Lookout Funeral Home. 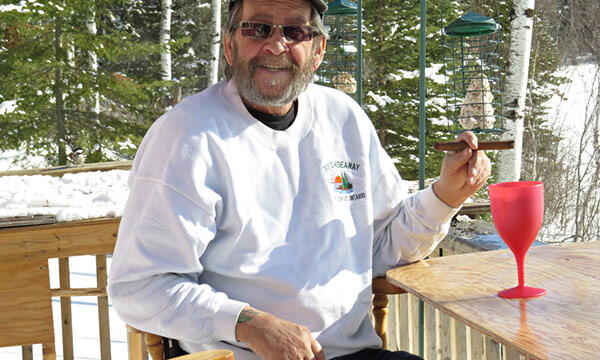 Dick's Hideaway: A February past

Yesterday I felt like a maple tree with the sap running after a cold night...