Adelina Ernesta Durante (nee DeSordi) was born on September 28, 1923 in Nervesa della Battaglia, Treviso in the northern province of Veneto, Italy and the fourth child of Giuseppe DeSordi and Rosina Pastrolin. Adelina passed away peacefully at Meno Ya Win Health Centre in Sioux Lookout, Ontario on March 10, 2022.

At the age of one year, her mother passed away leaving her father Giuseppe with four young children. He remarried three years later and Adelina soon had 3 more siblings in the newly expanded family.

While completing her schooling she worked the family farm. During her teens she met the love of her life and her future husband Attilio. Soon, the political winds of WW ll were beginning to blow across the European continent. With fear of war from the stories told by her father who fought the Great War of 1918 in her own province of Veneto, she witnessed the allied aerial bombings of the neighboring city of Treviso on Good Friday, April 7, 1944. During that time, she was retained by the German military to collect limestone rock along the shoreline of the Piave River used in the war effort. Five long and difficult years passed while waiting for Attilio to finish his military service in Sicily from 1939 to 1945. They wed in October 1947, and had their first son Frank.

She worked tirelessly raising her family. As a devote Catholic and member of the Catholic Womens’ League of Scared Heart Parish, she helped at parish bazaars, and was always ready to donate baking, hand made knitted hats and mittens. She was a firm believer in keeping traditions alive especially the importance of Christmas, Easter, and Sundays as time to celebrate her faith and family life. She was a keen homemaker and took pride in mending clothes for her four active boys, tending her garden and at the age of 36 earned her driver’s license. With the family car, she joined curling and bowling leagues, and serving the morning coffee crowd at the Seniors Activity Centre. Her passion was cooking Italian food which was the weekly tradition for the Sunday gatherings at “the camp” throughout summer.

As years moved on, both Adelina and Attilio set their eyes on travel. They returned to Italy for the first time in 1962 with the three eldest children and again several times later. With vacations to Hawaii, the Caribbean and within Canada that followed, they often spoke of the beauty and the vastness of the world and its people.

Adelina always knew that her family was her pride and joy. With the arrival of the first of 13 grandchildren in 1981, Adelina became the “nonna” of the family and proudly remembered the names and birthdays of each. Over time, the camp gatherings grew and her book shelf of family photos grew larger. As the years moved on, she became the “bis-nonna” always mindful of the gift of eight great grandchildren.

Always a believer in herself and with her steadfast determination, Adelina was proud to demonstrate her tenacity and inner strength learned earlier in her life. With the passing of Attilio in June, 2015, her beloved husband of 67 years, she lived independently in her apartment while in her final years of good health. In October 2020, Adelina was admitted to Meno Ya Win Health Centre where she received the care and support she required. Our thanks and gratitude are extended to Dr. Alanna Morgan and the dedicated staff that cared for our mom.

Adelina was the last surviving child of the seven siblings. She is survived by her 4 sons, Frank (Debbie), Robert (Carol), Lino (Sally), and Lawrence (Lori) their 12 children and eight great grandchildren, several relatives both in Canada and Italy who graciously salute her full well lived life. Riposa in pace Mamma.

In lieu of flowers, donations in her memory can be made to the Sacred Heart Parish through the Sioux Lookout Funeral Home 128 Front Street, Box 1449, Sioux Lookout Ontario. P8T 1B9. Online condolences may be emailed to: [email protected] 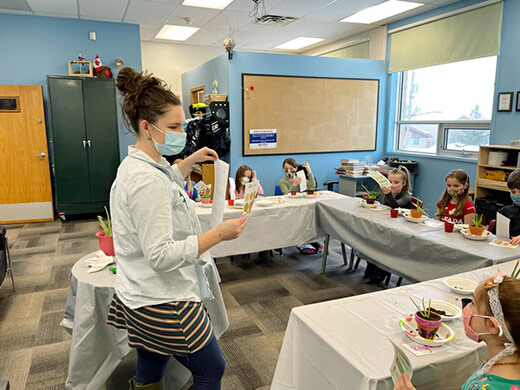 March Break (March 14-18) was a busy week for the Sioux Lookout Public Library with several online and in-person events hosted for area residents of all ages.