It is with sad hearts that we announce the sudden passing of Yvonne Buchan (nee Basketwang) on Monday October 28, 2019 with her family by her side.
Yvonne was born in Sioux Lookout on November 27 1955.
Yvonne leaves behind her Husband of 46 years, Robert Buchan of Savant Lake and four children Daniel (Agnes) Buchan, Jennifer (Dan) Gagne, Michael (Jessica) Buchan, & Shirley Buchan, 9 grandchildren and 5 great grandchildren and her beloved puppy Rex.
She is survived by her brothers & sisters, Joe (Vicki) Lyon, Walter Lyon, Victor (Romaine) Lyon, Elizabeth Lyon and Debbie (Rick) Kuehne and several nieces & nephews.    Yvonne is predeceased by her Mother, Jessie Lyon and Father Daniel Lyon.
She will be dearly missed by her cousin, Pauline Parker (whom she spoke to often).
Yvonne was raised in Umfreville, then she moved to Sioux Lookout, for a short time. It was then, that Yvonne moved to Savant Lake after she met Robert in July 1974, and raised their beautiful family. She enjoyed camping, fishing, hunting, crosswords, solitaire, puzzles, blueberry picking, chatting with friends, going for rides down bush roads with Robert, taking videos of wildlife and spending time with her family.
Yvonne was known for her delicious homemade bread, cream peas, and meatloaf, which we will all miss. She is the strongest lady we will ever know. Mom had the biggest heart and had quick witted responses, when you least expected it, which kept you laughing.
Yvonne was recently diagnosed on July 7, 2019 with Stage 4 Lung Cancer, which she was determined to fight with everything she had. Sadly, after her brief 3 month battle, she lost her fight. She will be forever missed by all who knew her. We love you “Mom”. She loved her loons, so every time we see or hear one, we will think of you!
There will be no visitation as cremation has taken place.  In keeping with Yvonne’s wishes, there will be no service. Interment of ashes will be held at a later date.
We would like to thank the Doctors & Nurses at the Meno Ya Win Health Hospital, for going above and beyond, caring for our Mother/Wife. Thank you Garth for your Prayers and Support. Thank you to Every one for your prayers & Condolences, and to the individuals who donated to help our family. 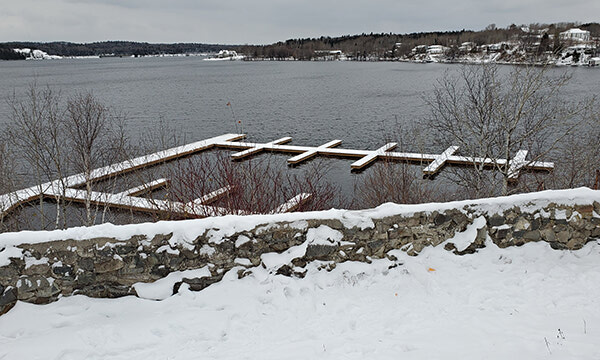 A last look from Rotary Park, atop the hill beside the stone wall, before freeze up.