We are sad to announce the passing of Traci Lee Roy (Prystupa) at the age of 51. Traci was born on August 13, 1969 at the Grace Hospital in Winnipeg, Manitoba to Mavis and Eugene Prystupa. She grew up on her parent’s farm in Woodlands, Manitoba and moved to Sioux Lookout later in life where she met Chris, they were married on February 13, 1993.  Traci passed away at the Thunder Bay Regional Health Sciences Centre after a short battle with cancer on October 25, 2020 at 1:43pm. Traci is survived by her husband Chris, children Callie and Clayton (Sam), grandson Colton, parents Eugene and Mavis, sisters Trina (Calvin) and Terri along with nieces and nephews.

Traci enjoyed spending her time outside at their new property on Abram Lake, working on their new home, taking her grandson for walks, having bonfires and camping with family.

She will be greatly missed by those who knew, and had the privilege of loving her.

The family would like to send their sincerest gratitudes to the medical staff who took care of Traci at the Thunder Bay Regional Health Sciences Centre with such care and compassion.

A celebration of life will be held at a later date, when larger groups are allowed to be together. 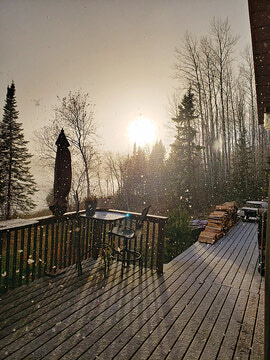 Mary took this picture as she stepped out of the cabin door, enroute to check on my progress barbequing supper in the Palace.

Just a few minutes before sunset we were treated with a flurry of big, soft snow flakes touching down all around us. We felt..