It is with great sorrow that the family of Ronald (Ron) Bennett announces his passing on August 4, 2020 at the Meno Ya Win Health Centre, Sioux Lookout, Ontario
Ron leaves to mourn his wife Lorraine of 53 years, son Dwayne (Michelle) Bennett and Deanne (David)  Kulchyski.  Grandpa also leaves to mourn his grandchildren Kyla and Joel Kulchyski, and Lauren, Isabelle and Rebecca Bennett.  Ron’s devotion to his family will always be remembered.  Ron also leaves to mourn his sister, Marilyn Forsyth, of Abbotsford, B.C. as well as niece Carrie and nephew Clarke Forsyth.
Ron was born in Lethbridge, Alberta, lived in Magrath, Alberta and later with his family moved to Vancouver B.C. where he completed his high school education.  Ron went on to Air Services School, Telecommunications and Electronics to become a Radio Operator for Transport Canada.  His first posting was in Saskatoon, Sask.  He then transferred to Coral Harbour, NWT for 2 years, then to Winnipeg, MB, Thunder Bay, ON, Churchill, MB and back to Thunder Bay.  In 1973 he promoted to the position of Flight Services Manager in Sioux Lookout, ON where he retired in 1995.
Ron was a “Mr. Fix-It”, he was able to fix anything, most everything. He built two houses, a log cabin, and renovated two houses.  He also did electrical, plumbing, and woodworking.  Ron was an avid snowmobiler.  He volunteered endless hours to the Ojibway Power Toboggan Club, Sioux Lookout and was recognized by the Ontario Federation of Snowmobile Clubs as a Volunteer of the Year.  He was a leader on most trips that were made to different communities in the Area.
Ron was predeceased by his parents Delores and Elmer Bennett, his in-laws Norman and Nell Apshkrum, his grandson, Blake Ronald Bennett, and his brother-in-law Daniel Forsyth.
As per Ron’s wishes there will be no funeral service.  A Celebration of Life will be held at a later date.
The family wishes to thank Dr. Jon Morgan, for his years keeping Ron in good health and the nursing staff at the Meno Ya Win Health Center, in particular Drew, Kate and Alyssa.  Your kindness during Ron’s short stay in the hospital was very much appreciated.
In lieu of flowers, donations may be made to the Heart and Stroke Foundation or the Alzheimer’s Society through the Sioux Lookout Funeral Home, Box 1449, Sioux Lookout, ON P8T 1B9. 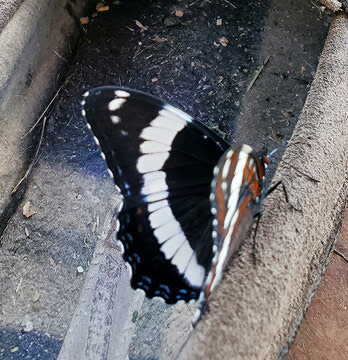 Dick's Hideaway: Check under the wing

We are seeing lots of White Admiral butterflies these days. They are among my favorites, seeming like small pets that follow around and sometimes land on my arms and legs and stay for extended times.