It is with great sadness we announce the passing of Noble Ward Bowes, in his 75th year after a stoic battle with cancer. An outgoing fellow, Bo leaves behind so many good friends and acquaintances made via his interests in fast cars and boats, his can’t-be-missed mornings with his Solemates walking group, and from his storied career as a member of the Canadian Ice Patrol dangling frozen chickens out of helicopters to polar bears (in addition to do his actual ice-observing job), then as a machine operator at Kytech Machine Works, and finally his true passion working with his youngest son Brian to create Bowes Guitars as a worldwide-known and respected endeavour. Bo was observed to play golf on occasion, but most golfers get 215 or so rounds in at Westview in a season,  no? Beloved Husband to Shirley, Father to Christopher and Brian, eldest Son to Emma and Elwood Bowes, Brother to Connie, Don, and Barb, and predeceased by his brother Jon, he is already deeply missed.  Finally, to the nursing staff at Southlake Hospital on the 5th floor cardiac surgical wing: we cannot thank you enough for the care and attention he received during his struggle. You are truly Angelic. 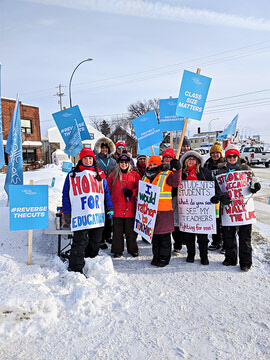 Schools across The Northwest Catholic District School Board (TNCDSB), including Sacred Heart School, were closed on Jan. 21 after OECTA (Ontario English Catholic Teachers Association) served a notice of strike action...