Passing of Dalseg, Alice Margaret on August 27, 2019 in Perth, Ontario.
Alice Margaret Dalseg (nee Kenny), beloved mother of Bruce Boles (Patti), Mark Boles (Katherine), and Jamie Boles. Predeceased by infant daughter Susan Boles and her darling son Paul Boles. Loving nana to seven grandchildren, ten great grand children and one great-great grandchild. Alice loved, and was dearly loved in return by her Dalseg family nieces and nephews. She will also be missed by her many Kenny nieces and nephews in England.
Alice was born in Newton Le Willows, England in 1926. She was an adventure-loving child, perhaps a bit of an imp, and, as an adult, often entertained family and friends with wonderful stories of her childhood memories. She told of her many adventures in London pre-WW II, as well as her life during the war. She enlisted in the British Women’s Land Army, because, as she often said, the uniforms were very smart.  Alice’s service in the Army was recognized by the award of a medal by the British government.
Alice immigrated to Canada in 1946 as a war bride. During her marriage to Blythe “Buzz” Boles, Alice and her four children lived on many military bases and in nearby places to them, including various provinces in Canada and also in Belgium and France.  Marriage to Melvin Dalseg of Sioux Lookout in 1973 saw Alice partnering with her husband to operate the Mayfair Theatre in Sioux Lookout. In retirement Alice and Mel wintered in Lake Havasu, Arizona where, we have heard, they often enjoyed travelling to visit the bright lights of Laughlin and
Las Vegas.
Alice would tell us on occasion that she had enjoyed a wonderfully interesting life, and when it came her time to leave us, she said “I have done it all; I am ready to go. I love you all.”     We love you too dear Lady Alice.   May your next step be as filled with as much adventure as your first.
Alice’s ashes will be interred beside her husband Mel and son Paul in Sioux Lookout. Date is Saturday September 21st, 2019; 1pm at the Northway Cemetary. If you wish, please donate to the charity of your choice in
Alice’s memory. 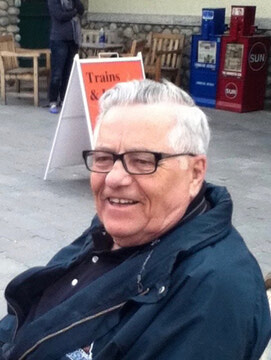 Memories and Celebrations of Life: In Loving Memory - Fabian Kimakowich